Muranga Governor Mwangi Wa Iria who has been impeached.
BY THOMAS KARIUKI
@thomaskariuki
The axe has fallen on Murang’a Governor Mwangi wa Iria;the Assembly voted that he is no longer capable of being their county chief.
He becomes the second governor to be removed by members of the county assembly (MCAs), the first being Embu Governor Martin Wambora.
Governor wa Iria was on Wednesday shown the door by representatives of the people who in 2013 overwhelmingly voted him in.
He is now the second governor from the Jubilee coalition to be ousted through a ballot by members of his own political frank.
The impeachment motion was tabled in the County Assembly on Tuesday by nominated MCA Ms Mary Waithirawho asked her comrades to get rid ofthe governor over alleged flouting of public finance management and procurement procedures.
In the motion, Ms Waithira saidthat the governor lacks accountability in management and use of the county’s resources and has incurred a debt of Sh2.5 billion which was never disclosed to the assembly.
“Gakoigo stadium under the department of Youth and Sports was allocated Kshs.30 Million in the financial year 2014/2015, yet it had incurred a total debt of Sh59 Million and no monies had been paid,” the MCA said.
She also claimed that the actionputs the county at a very precarious situation which may lead to auctioning of county assets.
Governor wa Iria is said to have allowed misappropriation of county funds by spending public money in private commercial entities.
Ms Waithira saidthat a report by the Auditor General on the financial operations of Murang’a county executive for the period, 1st July 2013 to 30 June 2014 showed that the County Executive contributed a total of Sh28.5 million to Murang’a Investment Co-operative Society (Shilingi-Kwa-Shilingi).
“The Society is an autonomous body independent of the County Executive and according to the Auditor General’s report; it was not clear therefore the circumstances under which the county Executive was funding it,” Ms Waithira said
She also claimed that in the County Governments Budget implementation review reports of the Controller of Budget, the County Executive under the stewardship of the County Governor incurred advertisement expenditure amounting to Sh247 Million against an approved budget of Sh7 Million as at 31st March 2015.
Governor Wairia was also accused of demanding money and not remitting the same to the tune of Sh125 million.
Ms Waithira also saidthat Mwangi wa Iria has been diverting public funds to non-devolved functions such as construction works at Kahuhia Girls amounting to Sh31 million and converting public primary schools into boarding schools.
The governor is also said to have used alternative procurement procedures to purchase a land along Kenol- Kabati Road, at a cost of Sh340 Million.
Additionally, he was blamed for borrowing a loan of Sh200 Million from Kenya Commercial Bank without guarantee by the National Treasury.
“The said loan was not factored in the Debt Strategy Paper of the County Government of Murang’a over the medium term expenditure framework,” the MCA said.
The Governor and his executive are said to have irregularly purchased 20,000 bales of Hay for cows at MariiraFarm at Sh4 million. “Investigations reveal that there was no documented evidence for release and delivery of the balesof Hay.”
Governor Wairia is as well accused of failing to remit statutory deductions of the defunct local authorities, which have continued to attract interest and penalties to a tune of Sh131.6 million.
The MCA also said that the county has also been paying 80 ghost workers because there lacks a “precise inventory of the staff establishment.”
Ms Waithira said governor Wa Iriahas repeatedly failed to consult the public over the preparation of county plans, budgets, economy and financial management policies.
The governor, she added “is disregarding the Assembly and undermining its legislative authority, through requisition of monies and not remitting the same, hence crippling the operations of the Assembly and undermining the independence of the latter.”
The resolution to impeach the governor will now be presented to the Senate who will investigate the claims, either approve the impeachment or retain him in office.

HOPE FOR SONKO IN THE BALLOT AS COURT ALLOWS HIM TO CHALLENGE REVOCATION OF HIS NOMINATION. 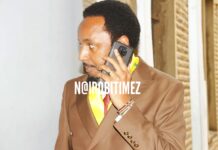 SONKO HEADS BACK TO SUPREME COURT AND EAC COURT TO OVERTURN VERDICT.