Deputy President William Ruto should sit down, evaluate and re-strategize his political progression. I am troubled with how DP Ruto lauded the Uhuru-Raila meeting and would really want him to declaim the commoner versus the royal relation. Sorry, allow me to call it the ‘hustler’ versus the royal family syndrome.

Allow me to remind DP Ruto the letter and spirit of the theatrics Kenya was presented to by Mr Odinga now christened a statesman.

Raila is the head of opposition in Kenya, with him he carried sycophants in the name of NASA principals who he ensured never got at the helm of his presidential bid. You remember that his luminaries in ODM ran the show in the alleged unified NASA political rallies.

Congratulations PRES.UHURU & RAILA for being statesmen. You have risen to the moment for kenya and against hate, negative ethnicity and division. The unity,stability and transformation of kenya supersedes all other partisan interests. Wangwana mubarikiwe mpaka mshangae.

He was the true image and carbon copy of NASA. Raila took issue with Ruto in his campaign and in a rally said that he made Ruto who he is today and that it is only him who can make him president. In this statement I read mischief, actually I take issue with this statement.

Raila has again called DP Ruto the ‘high priest’ of corruption; it is him who made allegations that the deputy president is a land grabber, named his hotel and businesses like Weston Hotel as one built with the proceeds from corruption money. Raila has linked DP Ruto to alleged Eurobond money theft.

All corruption allegations in Government have been geared towards soiling the name of the DP by linking him to key suspects- recall the National Youth Service saga where billions were alleged to have been stolen by “Ruto associates.” They say that there are no permanent enemies and permanent friends in politics.

Had the pleasure of meeting my brother @UKenyatta for discussions on issues afflicting Kenya. We have resolved that the future our nation is more important than any sole individual pic.twitter.com/l9Knre4TBS

However, there are permanent lessons from friends and enemies that obstruct progress and just a quick reminder out of the abundance of the heart, the mouth speaks.

Is it true that Raila and President Uhuru are brothers? Why do they call themselves brothers? Why is it that Raila addresses Ruto like someone he has picked from the shanties and made him into somebody? Raila boasts that Ruto was his political infant and has much to learn from him before his actualization.

Let me go back to the commoner versus royal relations. Ruto must have come so far despite his wealth, political prowess, and out-maneuvers, in the eyes of Raila and Mr Kenyatta, he is just a commoner.

He is not from a royal family; he cannot sit at the table of royals but can sit at the helm of it as a good planner who helps the royals achieve their goals.

Had the great pleasure of welcoming my brother @RailaOdinga to Harambee House where we had the opportunity for extensive discussions on matters Kenya. We have come to a common understanding, an understanding that this country of Kenya is greater than any one individual. pic.twitter.com/q7KLg798cO

His true status is that of a hustler who gets rich, who struggles to sit with the royals, who doesn’t know how to use a table handkerchief, who runs his businesses by himself and who fears getting poor again. But even a commoner, a hustler can rule royals if the royals blink or have logs in their eyes. Ruto needs me to be president in 2022, Raila said in a rally.

In all this I have got some few questions for DP Ruto.

Why was Ruto not invited to meet the son of Jaramogi? Is it that Raila cannot bow to Ruto; Raila cannot see Ruto as a royal; Uhuru could not allow Ruto in a royals meeting? What was agreed without Ruto? If it concerned national cohesion, integration and healing, why was Ruto not a part of it? Who is looking down on who- Raila to Ruto, Uhuru to Ruto or Ruto to Raila? What agreement was reached upon with Ruto- Uhuru’s brother? When meeting dignitaries, Uhuru invites Ruto, shows him off, allows him to cut deals with them for government when meeting political ‘brothers’ such as Raila- Ruto is nowhere to be seen.

I know that Ruto and his allies will rubbish this piece but I want to remind him of a Swahili saying that mbiu ya mgambo ikilia, kuna jambo.

The commoner is there to be used at strategic times, in a strategic way for a strategic purpose. What if Ruto is the one who met Raila, can there be a meeting between Raila’s political infant (Ruto) and Raila the royal man from the Jaramogi family?

Deputy President William Ruto must therefore sit down; evaluate this meeting and re-strategize if he is to sleep at statehouse one day. A commoner in statehouse, he must overcome this syndrome, if it means to take away, steal from, fight for, reclaim, or take by force. 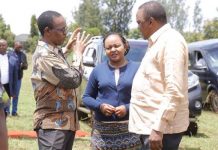