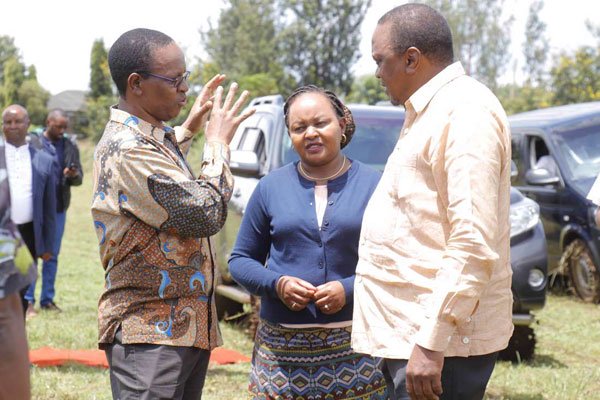 The dilemma facing the Office of the President is where to stand in the tussle between Governor Ann Mumbi Waiguru and the decision of the County Assembly of Kirinyaga.

Will the office on the hill close its eyes to the impeachment and give the assembly a fair day or will the rule of law be looked at from the eyes of loyalty rather than the letter and spirit of the constitution?

Ms Waiguru is a passionate proponent of the BBI, the brain child of President Uhuru Kenyatta and former Prime Minister Raila Odinga. Can her allegiance to the BBI process cover her alleged sin (s) in the eyes of Mr Odinga and Kenyatta and their foot soldiers at the Senate?

Your guess is as good as mine.

Why would a sitting Cabinet Secretary write an official letter with a Government Letterhead accusing the assembly of targeting women. Does the fact that one is a woman make her not accountable?

However, the Law Society of Kenya was quick to respond to the argument put forward by women crusaders among them governors and CSs alike.

But an undeniable fact of the law put forward by the LSK was that Ms Waiguru was not appointed through affirmative action but by every vote by the Kirinyaga people.

Allow me to take you through the thunder-full journey of Ms Waiguru and her switches.

It is a fact the Ms Waiguru developed a brilliant program at the national government that transformed young people’ lives that was dubbed the National Youth Service, NYS.

The projects the service undertook scared most politicians as her idea to grow the nation received accolades all over the world as it embarked on working with the most promising generation of Kenya – the youth. It appeared that Kenya had finally gotten the engine to economic development.

However, some few years into the program, the project was marred with corruption scandals that minted billions from Kenyan coffers. This was never resolved and still hangs on President Kenyatta’s legacy despite his tireless efforts to clean up the government.

A simple resignation with a caveat to be given lighter duties was handed to the president who accepted it with all the conditions given by Ms Waiguru. It is very unlikely to give a sitting president conditions unless the regime is a personal property.

Despite her tainted image from the national government, the people of Kirinyaga vowed by water and blood to bring back their daughter, Ms Waiguru to the political arena. They gave her Kirinyaga governorship.

I am constrained to remind Kenyans of the infamous threat by the US government that choices have consequences but allow me to hold the statement for now as we await the “due process” to be followed by the Senate.

The representative of the people of Kirinyaga voted to remove Governor Waiguru. I wish not to go into details of the impeachment and thereby speak on the ouster from a periphery.

Was the due process followed to unseat the governor?

It is the role of the County Assembly of Kirinyaga to invite the governor to defend herself from the allegations raised against her. Was she accorded this opportunity?

The Senate will scrutinize the documents attached to the impeachment to affirm either the threshold for impeachment was met or not.

It is also the role of the Assembly to remove through impeachment anyone they deem is preventing or circumventing the will of Kirinyaga people.

Allow me to mention that due process as defined in the constitution is not absolute as it depends on whose eyes it is looked into.

The national government is deeply eked into the tussle between the Kirinyaga people and their governor.

Interior CS Dr Karanja Kibicho is an active player in Kirinyaga matters as some few days ago, he visited his home county to inspect “national government projects”.

It is alleged that most of the MCAs attended the function and agreements were made on how development will be carried out in the county. Did these agreements reach the governor’s desk for the fact that she is the sitting governor?

President Kenyatta too is a big player in the politics and governorship of Kirinyaga, by the fact that one, he is the leader of Jubilee Party that has majority seats at the county assembly.

The president has also been vocal on corrupt individual quoted saying that he will not accept phone calls from persons alleged to have been involved in graft.

Who will falter? This is my just opinion, you can agree, disagree or continue reading it.

MP BARASA RECORDS STATEMENT ON MURDER LINKED TO HIM, TO REMAIN IN CUSTODY PENDING PROBE.