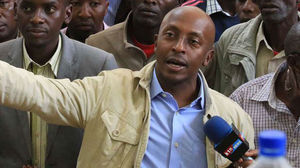 Former Tetu MP James Githinji Ndung’u has failed to plead to the forgery charges after claiming to have gone into self-isolation over Covid-19.

Through his lawyer, the former legislator told Milimani Chief Magistrate Martha Mutuku that he had been exposed to Covid-19 situation and he had taken precaution, and gone into self-isolation.

The magistrate directed him to appear in court on December 1, for plea taking.

In the case, Ndung’u is accused of forging minutes of the meeting of Kihingo village (Waridi Gardens) management one ltd.

Last week, he lost a bid to take control of the upmarket Kihingo Village estate in Kitisuru in Nairobi has flopped after the High Court dismissed his application.

Justice David Majanja dismissed the application by the MP through Kihingo Village (Waridi Gardens) Management One Ltd, who had sought to block shareholder resolutions electing new directors and removing Ndungu as chairman.

The meeting for his ouster was held at Capital Club on April 13, 2019. The long-running dispute has seen frequent scuffles inside the 42-acre estate and arrests and counter-arrests of the warring parties.

The Kihingo estate was originally developed from 2007 by Kihingo Village (Waridi Gardens) Limited. The equal shareholders in that company were Ndungu, his siblings Gitahi Gethenji, Bob Gethenji and their late mother Hilda.

Another company called Kihingo Village (Waridi Gardens) Management Ltd (KVWGM) was set up to run the estate. Initially, each of the 55 houses in the estate were to have one share each.