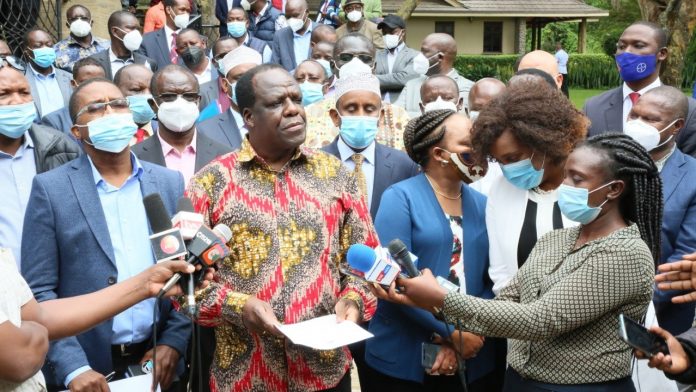 High Court has ruled that the Division of Revenue Act, 2016 is inconsistent with the constitution.

In a win for the Council of Governors, Justice James Makau further said the National government cannot allocate itself funds for and undertake devolved functions without first executing inter-government agreements required by Article 187 of the constitution.

The Judge then directed Parliament, CS Treasury, Commission on Revenue Allocation and the Controller of Budget to take necessary steps to amend the Division of Revenue Act, 2016 to conform it with the constitution.

In the decision, the Judge agreed with COG that all funds known as Division of Revenue Act as conditional or unconditional grants should be netted from the national government’s share of revenue and not from the overall revenue raised nationally and should be disbursed to the counties through the County Revenue Fund.

The Judge said the Division of Revenue Act, 2016 contravened the constitution by defining that the conditional allocations to counties shall be from the revenue raised nationally instead of the national government’s equitable share.

The Council of Governors moved to court in 2016 after Parliament enacted the Division of Revenue Allocation Act, 2016 to sharing and devolution of power.

The Act was assented on May 23, 2016 and provides for divisions of revenue modality between the national and county governments.

The governors protested saying the said functions are devolved but the government labeled them conditional grant was silently taking over the devolved functions by allocating funds to itself.

In reply, Parliament faulted the COG saying they have not exhausted all the alternative dispute resolution mechanisms to resolve the dispute.

The matter was referred to mediation through the Intergovernmental Budget and Economics Council but the parties could not resolve the issue.

COG pressed with the case and asked the court to determine whether the allocation of conditional grants in the division of Revenue Act was made in accordance with Article 202(2) of the constitution.

Governors also asked the court to determine whether the national government has constitutional obligation to disburse as conditional or unconditional grants, money allocated as national interests that are earmarked for devolved functions.

The matter was later referred to Intergovernmental Relations Technical Committee (IGRTC) but after several mediation talks, the parties could not agree.

A report filed by the council to court stated that national interests transcends both levels as it benefits the entire country and where a function has been earmarked as one being of national interest, an allocation for the same ought to be allocated to the government level that has been assigned the functions under the forth schedule.

Justice Makau said conditional grants given to counties by the national government must emanate from, its own share of the equitable revenue and not directly from the equitable share.

“There is no doubt that the national government in overlooking the provisions of Articles 187 and 189 of the constitution, its actions amounts to encroachment on the functions and mandate of county governments with respect to misinterpreting the law and allowing the accounting officer of the national government to spend money for conditional grants meant for counties,” the Judge said.