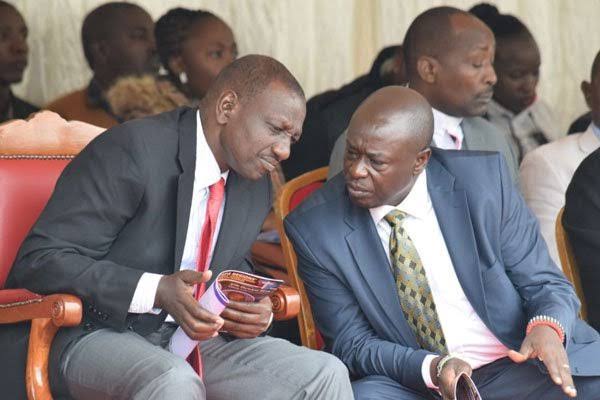 Mathira Member of Parliament Rigathi Gachagua has accused Ethics and Anti-Corruption Commission of intimidation over his political stand and 2022 presidential race.

While challenging a move for Sh200 million belonging to him from being forfeited to the state, Gachagua dismisses claims of money laundering.

In his replying application, Gachagua said the petition was driven by the desire to intimidate, harass and punish him for the stand he has publicly taken over presidential succession and his political association beliefs.

“The fact that EACC sought preservation orders against accounts holding my salary paid by the National Assembly is the clearest malicious nature of these proceedings and these proceedings are abuse of the legal process for extraneous and collateral purposes,” Gachagua said in court documents.

Gachagua adds that he believes that the forfeiture proceedings are not driven by a lawful, honest and sincere to have proceeds of crime forfeited or to prevent money laundering as contemplated by the law.

He also added that when the money was withdrawn in cash in any bank accounts, there was no law prohibiting such cash withdrawals.

According to the documents filed in court, Gachagua reveals he has invested in different companies where he is a director or shareholder. He said no law stops him or his companies from doing business with the government ministries.

He also denied claims that his companies received any money from Mathira constituency CDF and the anti-graft agency has not produced evidence to prove that.

“The deliberate and outright lie by the commission that I received CDF money from Mathira constituency is a well-orchestrated  scheme intended to malign my name, ridicule, perpetuate shame, hate and set me politically against my people of Mathira who I have served with honor and dignity” says Gachagua.

He also denied any knowledge that his business associate Kananu Kimemia was involved in money laundering.

He further confirmed that his fixed deposit bank account at Rafiki microfinance Bank limited has Sh165 million but denied the money are culmination of suspicious fund received or transferred from his other bank accounts or his business associate in a complex scheme of money laundering.

Also a businesswoman associated with Mathira MP Rigathi Gachagua and whose account was frozen over claims of money laundering dismissed allegations that the funds in the account were proceeds of crime.

Anne Kimemia says in an affidavit filed in court that the Sh1,138,142 held in an account at Rafiki Microfinance ltd are proceeds of legit and verifiable business she does through her company Jenne Enterprises.

“In an event, the deponent of the supporting affidavit has not disclosed any crime that Jenne Enterprises or myself has committed in earning the funds sitting in Jenne Enterprises’ account at Rafiki Microfinance Bank ltd,” she said.

The High Court froze several accounts holding a total of Sh200 million belonging to Gachagua and Kimemia over claims that they were involved in money laundering. One of the accounts belongs to Kimemia.

She further explained that Jenne Enterprises loaned Sh28.5 million to Wamunyoro Investments ltd for purposes of funding a tender for the construction of storm water drainage facilities in Embu town.

1The ‪2014-2015‬ tender was awarded to a joint venture between Wamunyoro Investments ltd and Machine Centre ltd, both linked to Gachagua.

She wants the court to lift the order, freezing the account saying ARA has failed to show how the funds in it are proceeds of crime. “Merely stating entries in a bank statement is not enough to demonstrate an offence of money laundering or receiving proceeds of crime and is not sufficient to warrant forfeiture of the funds held in kenne Enterprises account domiciled at Rafiki Microfinance bank ltd,” she added.

The agency obtained the order last year alleging that the MP, his companies and associates were involved in money laundering. It is alleged that the companies and his associates received more than Sh5 billion.