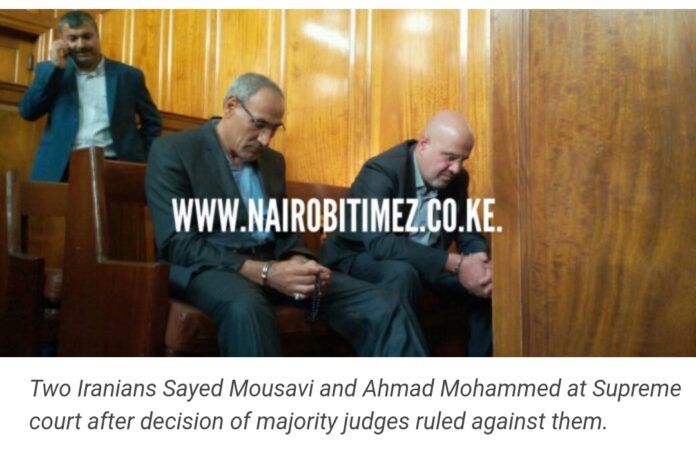 Two Iranians being held by the state over allegations of possessing explosive material have lost yet another bid to secure their freedom.

This was after Justice Lillian Mutende dismissed the application by Ahmed Abolfathi Mohamed and Mansour Mousavi, who wanted the court to resentence them. The duo were arrested after they allegedly came to Kenya for a 10 day holiday.

“The upshot of the above is that this court being functus officio is not seized of the jurisdiction to determine the matter. In the result, the application fails and is dismissed,” ruled Mutende.

The judge said functus officio doctrine is one of the mechanisms by which the law gives expression to the principle of finality.

“According to this doctrine, a person who is vested with adjudicative or decision-making powers may, as a general rule, exercise those powers only once in relation to the same matter…. The [principle] is that once such a decision has been given, it is (subject to any right of appeal to a superior body or functionary) final and conclusive. Such a decision cannot be revoked or varied by the decision-maker,” he added.

The duo had moved back to the High Court seeking re-sentencing in line with the provisions of section 333(2) of the Criminal Procedure Code (CPC), after the case was transferred to the Human Rights and Constitutional division of the High Court.

In their submissions, the duo acknowledged that their case had already been heard and determined by the High Court, which upheld the conviction and sentence.

“Their main contention is that it must have been an oversight on the part of the learned Judge of the High Court to have stated that he had considered the period that the Applicants were in remand custody from June 16, 2012, before they were convicted but went ahead to order that the sentence would take effect from the date that the applicants were convicted by the trial court on the May 6, 2013, a fact that was observed by the Court of Appeal and not faulted by the Supreme Court,” the Judge noted.

Prosecution through senior assistant Director of Public Prosecution Duncan Ondimu submitted that the court lacks jurisdiction to determine the matter.

He said that the matter had been exhausted in all the appellate courts as it was dealt with in the High court and the same issue arose in the Supreme Court and the High Court cannot therefore, purport to reopen or examine the decision by the apex court.

Ondimu argued that Articles 165(3) provides that jurisdiction to determine the question whether a right or fundamental freedom in the Bill of Rights has been denied, violated, infringed or threatened or jurisdiction to hear an appeal.

He added that jurisdiction is the authority of the court of law to hear and determine cases. “Jurisdiction may be general or specific, limited or unlimited. It may be conferred by the Constitution or Statute,” he submitted.

In March 2019, the Supreme Court reversed the acquittal of two Iranian citizens and upheld their 15-year jail term for terrorism.

“The respondents shall serve the remainder of their imprisonment term after which they shall be repatriated to their country,” ruled the judges.

While reversing the decision, the Supreme Court judges found that evidence given showed that the two planted a 15kg explosive at a Mombasa golf course and failed to give evidence on their business in Kenya.

However, Justice Mohammed Ibrahim and Smokin Wanjala dissented, saying the duo should have been released.

The court however ordered the two jailed will now serve their remaining eight years term at Kamiti Maximum prison after serving Seven years in jail and upon completion of their jail term, they will be repatriated to Iran.