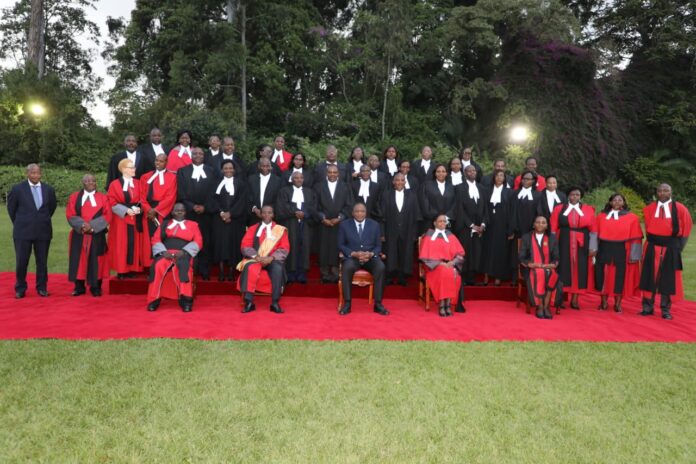 President Uhuru Kenyatta on Friday swore in 34 judges leaving out six others despite protestations from across section of Kenyans.
President Kenyatta swore seven judges to join the Court of Appeal and the rest to join the Employment and Labour Relations court as well as Environment and Land court.

Earlier in the day, Kenya Magistrates and Judges Association and Law Society of Kenya has joined their voices in condemning President Kenyatta for leaving out the six judges, who had been recommended by Judicial Service Commission (JSC).

KMJA through Secretary General Derrick Kutto said the decision by the President to leave out the six is therefore baffling, unfounded and patently unconstitutional.

“The President is setting a very bad precedent for this country, one of not following the rule of law and disobedience of court orders and it is against this background that KMJA calls upon the President to immediately gazette the six that were left out,” he said.

Kutto said once the JSC has recommended names for appointment, the President has no power to tinker with the names.

He added any such attempt amounts to interference with the Institutional Independence of the JSC, violation of the Constitution and in particular, the rule of law which the President swore to uphold.

LSK through Chief Executive Officer Mercy Wambua said the action of the President to omit or fail to appoint the 6 Judges is in contravention of Article 166 of the Constitution.

She added that the move was also against a finding in Constitutional Petition No. 369 of 2019, Adrian Kamotho Njenga –v- Attorney General, where the Court held that once the Judicial Service Commission makes recommendations, the President has no other option but to formalize the appointments.
CEO Wambua said the President cannot change the list, review it or reject some of the names.

“President must appoint the persons as recommended and forwarded to him by the Judicial Service Commission,” CEO Mercy added.

The Council said it is concerned and condemns the failure by the President of the Republic of Kenya to appoint all the Judges as required under Article 166 of the Constitution.

“This is an outright contravention of the Constitution of Kenya, a blatant disregard of the Rule of Law and undermines the independence of the Judiciary. We wish to remind the President that the Constitution is the supreme law of the Republic and binds all persons and all State organs at both levels of government. Further, that all sovereign power belongs to the people of Kenya and shall be exercised only in accordance with the Constitution,” Wambua said.

The council called upon President Uhuru Kenyatta to comply with and uphold the Constitution by appointing the remaining 6 Judges without any further delay failure to which we shall move to Court for appropriate orders.

The Council further notes with great concern the continued attacks on the Judiciary by the President of the Republic of Kenya as well as by the members of the Executive. In particular, the Council takes great exception to the remarks made in the President’s address to the Nation on the occasion of the 58th Madaraka Day, held at the Jomo Kenyatta International Stadium, Kisumu on June 1, 2021.

In his remarks, the President noted that, indeed Kenya’s Constitution has been celebrated far and wide as a progressive Constitution but soon thereafter went on a rampage onslaught against the Judiciary for among others, its role in nullifying the 2017 Presidential Elections and in the Judgment on the Building Bridges Initiative or Constitution Amendment Bill, 2020.