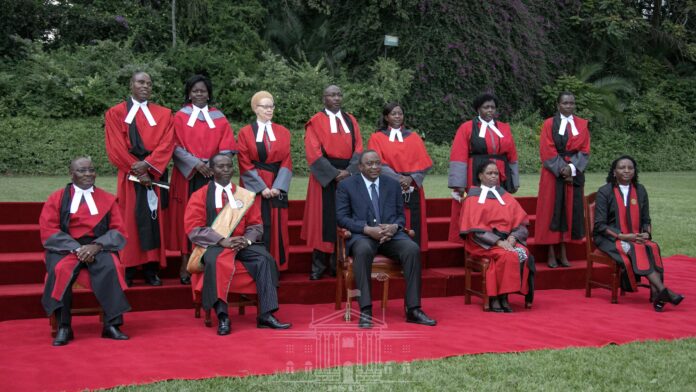 A Nakuru doctor has moved to court seeking to stop Chief Justice Martha Koome from assigning any work to newly appointed Judges.

In a petition, Dr Magare Gikenyi Benjamin wants the court to bar the CJ from assigning all 34 judges who were gazetted, appointed and sworn in on Friday at Statehouse, any work pending hearing and determination of the petition.

“A conservatory order of prohibition prohibiting Chief Justice, its agents or assigns from assigning duties to 34 judges in the gazette notice no. 5233, 5234 and 5235 pending determination of this application inter-parties and thereafter pending hearing and determination of this Petition or such orders of the court may issue, ” Dr Magare urged the court.

He also wants Judiciary Chief Registrar Anne Amandi to provide email addresses of all the 34 judges for purpose of serving with directions of the court.

Dr Magare terms the President’s move as unconstitutional as there is no room of cherry picking JSC’s nominees once forwarded to him.

“The president is disobeying court orders and constitutional guidelines and he has no powers to indirectly cancel the appointment of the judges,” says Dr Magare.

The medic, who is a consultant and general surgeon also says that Kenya is a democracy governed by the rule of law and it’s not a failed state or a dictatorial or authoritarian state where president decides what to do even in the face of straightforward constitutional requirements.

“If the same is left out unabated, the independent of the Judiciary which Kenyan hold dearly will be lost or eroded,”.

He adds that the six judges and Magistrates Judges Joel Ngugi, George Odunga, Aggrey Muchelule, Weldon Korir, Evans Makori Kiago and Judith Omange have been discriminated against article 27 of the constitution.

He adds that from the forgoing, the actions of the president, chief justice and attorney General will lead to the loss of public confidence, anarchy, outright discrimination and abuse of power and political class against independent institutions.

“It is important to maintain constitutionalism, rule of law, law and order, good governance, non-discrimination, protecting of the constitution and this matter is of public interest,” he added.

According to the Sergon, the cherry-picking of the judges and leaving others takes away powers of Judicial Service Commission and independence of the Judiciary.

He further added that presidency is national office and should not be reduced to who is at the helm of the Chief Justice office.