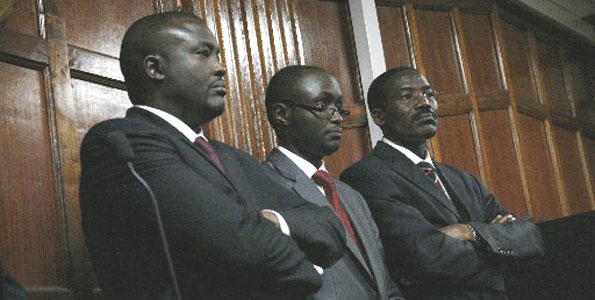 Former National Hospital Insurance Funds (NHIF) CEO Richard Kerich and others charged with defrauding the institution over Sh 116.9 million have a case to answer,a Nairobi court has ruled.

The magistrate noted that the evidence tabled before court through prosecution witnesses is too strong against all the accused persons in regard in participation to the conspiracy to defraud NHIF of over 116 million.

In his submissions the Director of Public Prosecutions (DPP) had asked the trial court to find the accused persons with a case to answer of the several graft charges they face.

They were charged in connection to the provision of medical scheme for civil servants and disciplined services awarded to Meridian Medical Centre ltd at a cost of Sh116.9 million.

The former NHIF officials are accused of entering a deal with Meridian Medical Centre Limited for the provision of medical services under the civil services and disciplined forces scheme, when they were aware that Meridian had no capacity to provide such services.

Kerich, Chacha and Chingi are also accused of abuse of office, failing to comply with procurement laws and conferring a benefit of Sh 43 million to Meridian, offences they allegedly committed December 21, 2011 and February 8, 2012.

Meridian was among 173 facilities that responded to an advertisement by NHIF calling for proposal for provision of outpatient services to civil servants.

The cover, known as Mzalendo, shortlisted 10 branches belonging to Meridian. The Scheme, was to start running from January 2012.

The court, however acquitted Chacha on one count of failing to comply with the laws relating to procurement saying his involvement in the process came later after the procurement had been done.

“The involvement of the 2nd accused (Chacha) only came later on, that is, post the fact of selection of the 6th accused (Meridian) as a medical service provider and contracting. On the failure to with the law relating to public procurement,” Magistrate Mugambi ruled.