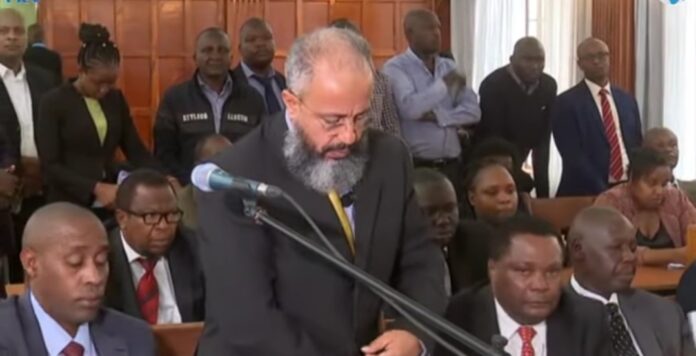 A former chief executive officer of Nokia Corporation has filed an application opposing special prosecutor Taib Ali Taib from representing the multinational in a case pending before the High Court.

Rajeev Suri, the former CEO of the multinational also opposes the firm of Anjarwalla & Khanna LLP in the case saying senior partners in the law firm acted in cases pitting Nokia and TechnoService ltd, hence privy to confidential information.

In the matter, Nokia and its former directors and lawyers moved to the High Court to stop criminal proceedings brought against them by TechnoService ltd.

The giant telecommunications company moved to the High Court to stop private prosecution of its top bosses for allegedly obtaining tax information of a Kenyan company for use at an international court.

The telecommunications company says its reputation and image as an information technology company is at stake and the orders, suspending the charges brought by TechnoService ltd, out to be granted.

“Considering its international repute as a well-known multinational telecommunication and information technology company, it would be imperative that the orders of stay are issued to prevent the further perpetuation of abuse of the process of court,” the petition before the High Court states.

Nokia and TechnoService have been battling in various courts and late last year, the Kenyan company was allowed to privately prosecute the multinational company together with its officials and lawyers.

Those to be prosecuted include Rajeev Suri and Aapo Saarikivi and Roschier Attorneys limited for allegedly illegally obtaining tax information as well information on TechnoService from the Companies Registry.

TechnoService said Nokia intended to use the information for purposes of defeating justice in a case that was pending before the International Chamber of Commerce (ICC) in Helsinki, Finland.

It is alleged that Nokia and its agents obtained the information from Registrar of Companies and Kenya Revenue Authority (KRA) between September 2018 and March 2019 as Nokia asked for security of costs from the Kenyan company, before the arbitration case proceeds. The matter was later withdrawn.

And after moving to the High Court, Suri said Anjarwalla & Khanna LLP have filed suit papers and made representations to indicate that they act for him.

He also revealed that Taib, a gazetted Public Prosecutor on the other hand has made representations herein that he acts for Nokia Corporation.

He said the law firm has generally acted for TechnoService and its directors including Bulent Gulbahar in several matters and has closely interacted with the company and, thus, has confidential corporate, trade and operational information which poses a risk of undetectable breach and abuse of advocate client confidentiality.

“In view of the foregoing, Anjarwalla & Khanna LLP was and is privy to confidential information passing between parties herein prior and during the period that it represented TechnoService,” he said.