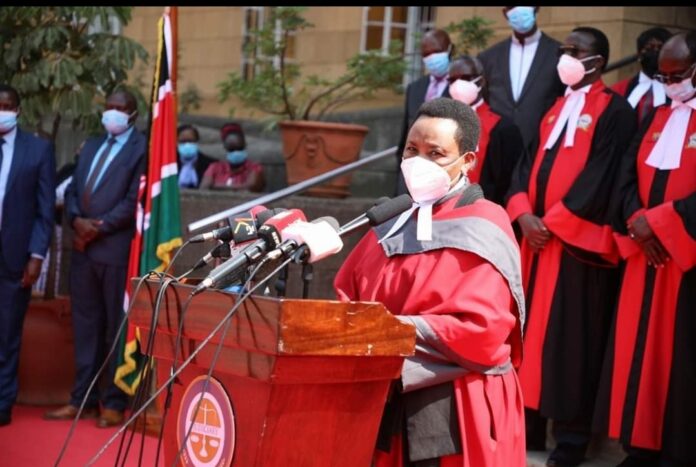 Justice Thripsisa Cherere vacated the orders issued by Judge Patrick Otieno and directed the petition to be transferred to Nairobi for consolidation with a similar petition pending hearing.

“Petitioner has not made out a case for confirmation of the Conservatory Orders granted on January 29, 2021 and the same are hereby discharged,” ruled Judge Cherere.

Justice Cherere found a preliminary objection raised by the DCJ has merit.

The Meru judge also found that Mwongela Mbiti did not made out a case for conservatory orders.

“I additionally find that the overriding objectives of facilitating the just, expeditious, proportionate and affordable resolution of this Petition would best be served if it is heard together with Nairobi High Court Petition No. E408 of 2020,” Judge added.

Mwilu was aggrieved by the ex-parte conservatory order obtained by Mwongela and asked the court to lift the same.

DCJ also filed a notice of preliminary objection on the grounds that the conservatory order is vitiated by material non-disclosure and the petition and the motion violate the doctrine of subjuice.

Mwilu also argued that court has no jurisdiction to hear the petition by Mbiti and the motion.

The judge issued orders restraining Deputy Chief Justice Philomena Mwilu from holding her office or acting as Chief Justice, until a case filed by a Nairobi lawyer is heard and determined.

Justice Otieno also restrained Justice Mwilu from sitting in the Judicial Service Commission (JSC) and from the office of the Ombudsperson of the Judiciary until the case filed by lawyer Isaiah Mbiti Mwongela is concluded.

Mwongela moved to seeking orders against DCJ Mwilu saying there are complaints against her pending before the JSC.

He said it was unfair for her to continue sitting at the JSC or exciting her role as DCJ yet the cases have not been determined.

He adds the functions of the Office of the Ombudsman include, but are not limited to, assisting the Chief Justice in carrying out the preliminary processes in exercising the disciplinary powers vested in the Office of the Chief Justice under Section 15, Part IV of the Third Schedule of the Judicial Services Act and gives effect to Section 8(e) of the Commission on Administrative Justice Act.

“As a member of the 2nd Respondent, the 1st Respondent performs the functions of the said Commission outlined in Article 172 of the Constitution, including appointing, receiving complaints against, investigating and removing from office or otherwise disciplining registrars, magistrates, other judicial officers and other staff of the judiciary” he adds.