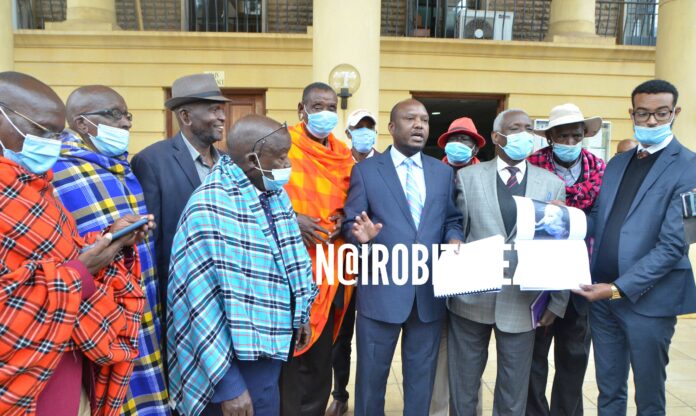 Maa community living in Laikipia, Kajiado and Samburu have moved to court seeking to block the ongoing operation by the government to flush them out of private ranches in Laikipia County.

In a case under certificate of urgency, the pastoralists want the court to compel the Ministry of Interior to stop the security operation, pending the hearing and determination of the Petition.

The Maa community through lawyer Thomas Wetangule has said the ongoing operation in Laikipia County by the government is affecting their livelihood.

According to the communities, there is a need for assurance of the rights of innocent pastoralists who are at the risk of being branded criminals going by the prevailing mood where the locals have been turned against all pastoralists without exception, in a move that exposes them to hatred, threat of life and destruction of property.

The community says that the case raises weighty issues of law touching on the rights of a marginalized and minority group and therefore needs urgent consideration by the court.

They argue that the intended forced eviction is likely to be implemented without regard to the rights of pastoralists as enshrined in Kenyan law and international human rights law.

They say the operation is going to be  indiscriminate and based on profiling of the Maasai people and livestock in a manner that exposes them and their livestock to indiscriminate treatment.

“Unless this Court intervenes urgently the Police are going to undertake the intended evictions without separating criminals from genuine pastoralists in the area and this will lead to loss of lives and livelihood without resolving the underlying issues,” they urged the court.

They argue that the security issue in Laikipia has been longstanding and does not need a reactionary operation without addressing the underlying land question that has been the cause of tensions in the area every now and then.

“There is need to intervene through grant of conservatory orders to prevent mishandling of the security issue and to allow the government to offer a lasting solution that brings peace and tranquility to all residents without discrimination,” they pleaded.

They added that the country is staring at a security crisis if the Ministry of Interior goes on with the planned security operation that the Cabinet Secretary has described as ruthless, clearly inciting the police against the herders.

It is their argument that the marginalized group is facing a gross violation of their rights and a threat to their only means of livelihood.

They are arguing that there is prevailing insecurity in Laikipia County pitting some pastoralists and ranch owners, where criminals have taken advantage of security lapses to wreak havoc on residents and on the other hand police have been on wanton destruction of livestock belonging to the petitioners.

They argue that the government has threatened to undertake a security operation leading to eviction of all pastoralists in the area without due consideration of the inherent rights of the Petitioners and hence an impending violation of fundamental rights.