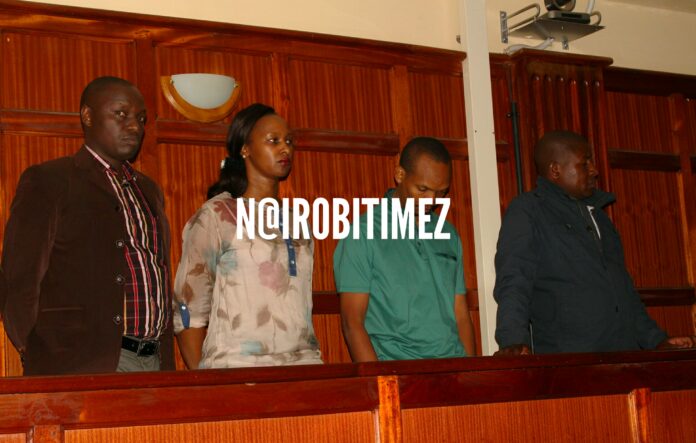 A sister to aspiring Kisii politician Don Bosco Gichana and a former bank manager have been handed an 18-month jail term after they were found guilty of stealing over 100 million from Fina Bank over a decade ago.

Gladys Moraa, Graham Sagwe, the former Fina Bank manager- now known as Guaranty Trust Bank (GT Bank), Robert Moseti and Obadiah Nyambane were however given one year to repay 15 million, failure to which they will serve the sentence.

Chief Magistrate Francis Andayi convicted the four accused persons after finding them guilty of two counts of conspiracy to defraud and stealing. He said the prosecution had proved the case against them beyond reasonable doubt.

The court directed their cash bail of Sh4.5 million, which had been deposited in court, to be paid of the fine while the balance of Sh10.5 million should be repaid in one year.

Gichana, the master-mind of the fraud did stand trial in Kenya since he was arrested and detained in Tanzania over money laundering.

“If you will have not paid the Sh 10.5million by January 10, 2023 just take yourselves to the prison to serve the 18 months’ sentence,” Andayi ordered the convicts.

The magistrate handed down the non-custodial sentence after they pleaded with the court through their lawyer Ismael Nyaribo who said they were remorseful and have since reformed for the last eleven years they have gone through the trial.

“I note that the accused attended court religiously for the last eleven years,” Andayi stated.

The magistrate said the suspects had been directed by Justice Mohamed Warsame in 2010 to return the money which had been distributed amongst five people after it was re-routed from Fina Bank to an account of Malch Construction Limited at EcoBank.

“After lawyers Albert Kuloba and Ian Maina returned the money received by their law firms charges filed against them were dropped then they were cleared of any wrong-doing by Justice Mohamed Warsame,” Andayi said.

The magistrate added that it is in that spirit that over Sh80 million were returned to the bank.

Magistrate Andayi noted the balance of Sh15million was not paid since the master-mind of the fraud Gichana was arrested and detained in Tanzania although he has since been freed but police did not arraign him in court to face justice.

The prosecution had lined up 53 witnesses but reduced the number to seven after the repayment of over Sh80 Million by the accused.

“The maximum sentence for the offences against the accused of conspiracy to defraud and theft which the accused have been convicted for is three years without an option of fine. However I will sentence each of them to serve 18 months but I will suspend the term for 12 months to give room to the convicts to repay the balance of Sh15million to the last cent as they had promised when they were put on their defence,” Andayi noted.

The magistrate wondered why the police did not arrest Gichana who was the mastermind of the fraud, saying he has been roaming about in the country even after being freed from Tanzania prison for charges of money laundering.

“The master-mind of the fraud Don Bosco Gichana is still roaming around freely because the police have failed to arrest him since 2009 when this case was first filed in court. One wonders whether this is as a result of conspiracy to defeat justice,” said the magistrate.

Andayi noted that there is overwhelming evidence against Gichana which was availed by his co-accused person including his sister (Moraa) who informed the court that the fraud was masterminded by her kin.