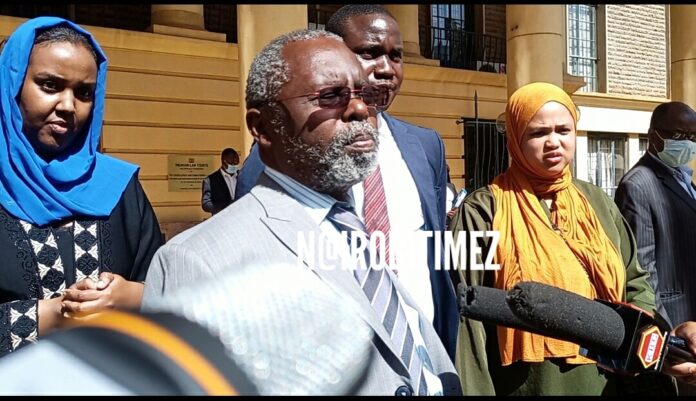 The family of the two men who were arrested yesterday over suspicion of murder in the UK have pleaded with the police to allow them access their kin.

Addressing the media at Milimani Law Courts building in Nairobi , Siyad Abdi Hakim, a sister to Hooda Mohammed, and Halima Omar, wife to one of the suspects said they only want to confirm that the two are alive.

“It’s been 35 hours since their arrest. We just need proof of life. It’s a concern to us,” Siyad said.

“My husband was taken at 6am yesterday. They lied that they were held at DCI. We went but we didn’t see them. We’re really concerned.” Halima told the press.

According to the family through their lawyer Wandugi Karathe, eight officers went to their homes on Wednesday at 6 am. One of the persons was of British descent and they allegedly banged the door and forcibly entered before commanding everyone to sit down.

“They did not introduce themselves apart from saying they were from Interpol. They took a passport photo and ID photo of Halima and said they were going to call with the suspects’ whereabouts but they have not done that” she added.

Halima said the family has been searching for them at nearby police stations, including Gigiri and Muthaiga, without success.

“According to the information we have, which is not a lot, they were supposed to be brought to court for extradition (proceedings). We can deal with that. But we can’t deal with the police refusing us access to the two. The police owe the public a duty. The right of an accused to be seen by their lawyer is the law,” their Lawyer Wandugi said.

Kirathe said the family will file for Habeas Corpus tomorrow if the police will not have given them access to the arrested.

DCI AND DPP AT LOGGERHEADS OVER GUIDELINES ON TERRORISM OFFENCES.