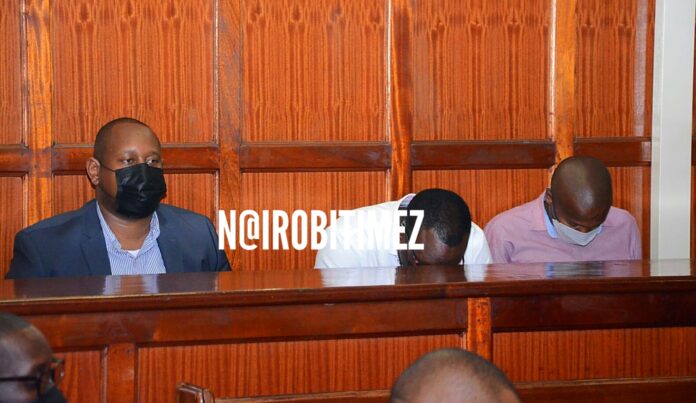 An assistant superintendent of police has told a Nairobi court how they arrested three suspects among them former Safaricom employees for demanding Sh300 million from the telco so as not to release confidential subscriber information obtained from the company.

Peter Maina, who is attached to DCI headquarters and seconded at Safaricom fraud investigation unit, told Chief Magistrate Wendy Kagendo that he received a letter from the DCI boss George Kinoti instructing him to investigate a complaint on data leakage.

“After receiving the letter, I instructed Sergeant Joseph Chebor who is in my team to commence investigation and be the investigating officer in that matter,” Maina told the court.

The officer testified that he later received information from Patrick Kinoti who is in charge of ethics and compliance at Safaricom that there was a man by the named Kabugi who sent him a sample of data that he believed was from Safaricom.

The officer told the court that the said Kabugi was demanding money so that he could not expose the data to the public.

“Upon receiving the information, we laid a trap and managed to arrest the said Kabugi. He was arrested on 6th June 2019 along Waiyaki way,” Maina told the court.

The court heard that at the time of arrest, Kabugi was with another suspect Charles Njuguna Kimani, who was also arrested. The two were having a conversation about the data leakage when they were arrested.

“After arrest we recovered the mobile phone and laptop belonging to Kimani and also confiscated Kabugi’s phone,” the officer added.

The officer further testified that after the arrest of the two suspects, they proceeded with interrogation where they disclosed how they were getting the data.

The two allegedly told investigators that they were getting the data from two Safaricom staff identified as Billy Kinuthia and Brian Njoroge Wamatu.

After the officers received the said information, they proceeded to arrest the two employees.

“In order to arrest the two, Kimani kept engaging them in conversation through the phone and arranged for a meeting where they were to meet in Kilimani area at around 7.30pm,” the officer added.

During cross examination, the court heard that Kinoti had sent Sh50,000 to Kabugi. This was allegedly to enable the officers to nub the suspect.

The court further heard that Kabugi had filed a petition at the High Court which was later thrown out.

In the case, Kinuthia and Njoroge, former employees of Safaricom, have been accused of accessing confidential information.

Kinuthia and Njoroge were senior Manager, Networks and M-Pesa systems auditor and Head of Regional expansion respectively and they allegedly used their privileges to access confidential subscriber data.

They are accused that in breach of their contractual and statutory duty to keep the data so accessed confidential, the duo decided to sell the data to a leading sports betting company. The duo allegedly brought in Benedict Kabugi Ndung’u so that he could help them sell the information.

Following their arrest, the DCI obtained an extract of conversation between the duo demonstrating how they managed to access the data and sent it to a google drive controlled by Kinuthia, who then shared it with Njoroge and Kabugi, who downloaded it to their personal laptops. The police managed to seize three laptops.