There are leaders masquerading as those who can bring about a united opposition front to be dubbed NASA. I want to remind Raila that with or without Musalia Mudavadi, Raila Odinga already has western votes.

In 2013, more people from western voted for Raila than Mudavadi. Now what makes Mudavadi feel that if he joined forces with Raila, he will bring more votes to oust a united Jubilee?

The only chunk that Mudavadi brings as votes is just a 483, 981 difference compared to the 832,892 votes President Uhuru Kenyatta beat Raila with in 2013.

Raila’s agenda should be to consolidate the whole western region votes with or without Mudavadi and maintain relations with Kalonzo Musyoka who gave him 1,069,529. So the gamble then should be between the Kalonzo’s 1,069,529 against Mudavadi’s 483, 981, where should Raila fall. In actual sense, Raila is better placed with Kalonzo that Mudavadi. Only a deaf politician will not hear the warning bells.

He should work with Dr Bonni Khalwale and Moses Wetangula in western and not any other baggage. These two gentlemen managed to bring him more western votes than the now proclaimed spokesperson of the Luhya community.

Again Raila should trend carefully because, if he takes Mudavadi other than Kalonzo Musyoka as his running mate, he loses the whole Kamba vote.

The western vote is less of a hustle as compared to the Kamba vote.

Facts have it that Raila received more votes in western than Mudavadi did. What does this say? If Raila is to consolidate the western vote block, and make peace with leaders who may have fallen idiocy to jubilee charm, then he will have achieved more than allowing one self- seeking leader.

Mend fences with political bigwigs like Ababu Namwamba and others from the Mulembe Nation. I dare say Ababu because facts have it that a big percent of Kenya’s population is youthful. Ignoring Ababu is ignoring the youth of western.

The other leaders are more of gentlemen than Mudavadi who was used to deny Raila votes but because of self-interests, Mudavadi now purports to want to work with Raila for his political convenience.

Mudavadi is a jubilee mole and will not hesitate to join the other camp if the Raila camp doesn’t favour him. I will not remind enigmatic Raila that politics is about interests.

The worst mistake Raila will make is to dissolve CORD, a coalition that has taken time to build and maintain, to join a bandwagon of self-seekers positioning themselves as the ‘saviors of the dock.’

If Mudavadi wants to join hands with Raila, that is his democratic right but he should not come with conditions to dissolve Cord to create a coalition of his own liking, NASA.

Mudavadi wants Raila to believe that he cannot win without him. That’s a very big lie. With or without him, Raila will win if only he remains focused and revises his campaign strategy to ensure that he takes the Mudavadi vote and keeps his loyal friends from western.

Mudavadi is still a Jubilee mole. He wants to create uncertainty and in-fighting in cord so that his friends from the other coalition can unite and beat a confused Cord. Who cannot see this?

Listen here, why did Mudavadi wait until all this while to join hands with Cord? After 2013, he worked with Jubilee. What makes you think that he has turned overnight to be the ultimate savior now? I dare say that he is not worth the gamble.

The only position I would recommend for Mudavadi is to remain as a spokesperson for his community and if all goes well become an MCA for his region. 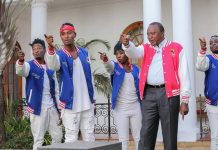 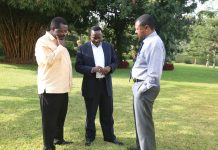 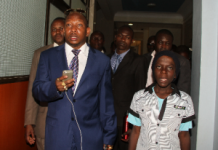