Director of Criminal Investigations has ordered immediate probe into and incident where a seven year old son of a senior state prosecutor was attacked  and seriously injured by five German dogs at Crayfish camp hotel in Naivasha.

According to the victim’s father Joseph Riungu who is a prosecutor at the office of Director of Public Prosecution  Nairobi the incident occurred on November 28 where his son and other school children had gone for camping.

Riungu said he has already reported the matter to the DCI who has directed DCIO Naivasha to take over the case from Kongoni police station in a view of of conducting investigation.

The DCI wants the proprietors of Crayfish be arrested and charged.

Speaking to NairobTimez on the matter, Director of Criminal Investigation George Kinoti said setting dogs in a public licensed premises of whatever business is criminal negligence and punishable by law.

“The management are culpable and directed arrest, detention of the canibals and arraignment in court”. Said DCI Kinoti.

Riungu described the proprietors as influential individuals working under impunity. The son is a student at Marion Preparatory school.

My son was walking back to the rooms to pick up his clothes at around 6 o clock in the evening with his friends ,when the dogs pounced on him. They were three large German shepherd dogs and two others “ Riungi says.

On confronting the Hotel Management Riungu says; ”They have not apologized over the incident neither have they reached out to me.

They have refused to take responsibility despite claiming that the dogs were friendly,” Riungu added.

Riungu  has obtained a P3 form from police and that said he, his son and a teacher who had accompanied the son have recorded statements.

“This impunity of negligence on the part of the Crayfish camp hotel proprietorship must be exposed to protect other children being viciously attacked by the uncontrolled and not manned German shepherd dogs. This is purely criminal negligence under Section 23 of Penal Code,” Riungu added.

Crayfish Camp Naivasha is located along Moi South Lake Road, 18 km from Naivasha town set in natural Acacia woodland within one of the largest flower farms.

Crayfish Camp is popular with both domestic and overseas tourists and offers a wide range of activities such as mountain biking, boating, horse riding, nature walks, indoor games and picknicking. 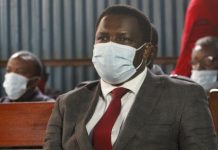 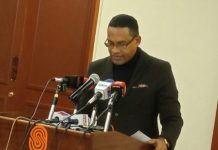 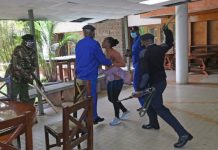