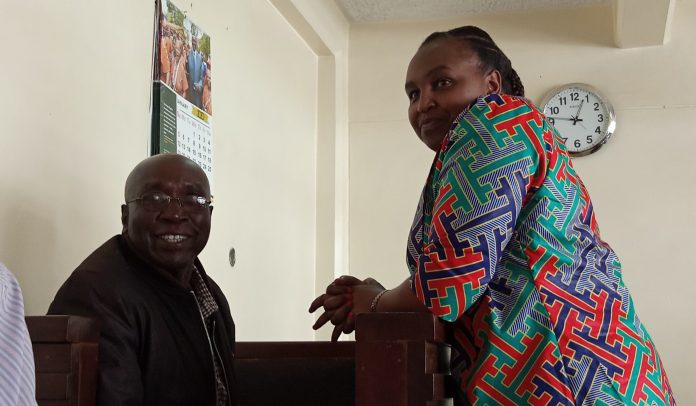 An uncle to Maryanne Kitany has narrated of a horrifying one hour attack by a gang of 100 goons at her Runda home under command of Meru Senator Mithika linturi.

Zablon Cheruyoit told the Milimani chief magistrate Peter Gesora their son in-law Senator Linturi stormed the compound with the goons. He said they were armed with pangas and clubs.

He alleged that six women claiming to be Linturi’s wives were among the goons, hired to evict Kitany and her children from her Runda house.

“Wapi Kitany? Sisi ndio bibi wa Linturi (where is Kitany? We are Linturi’s wives)”, he told the court.

Cheruiyot told the court that he was present on two occasions when Linturi tried to forcefully access the house.

He said the lawmaker married Kitany under the Nandi Customary laws in March 2016 and did not know they had problems until he came to her house in September 2018.

The witness told the court that he had gone to Kitany’s Runda house to stay with his daughter who was recovering from a road accident and broke her leg. “I requested Marianne to take her in,” he testified.

While being led in his testimony by lawyer Dunstan Omari, he said he was in the house in November, when he saw Linturi and four other men trying to gain entry into the compound.

“From the house I could see Linturi engage in an argument with the security guard and after a while they left,” he added.

Cheruiyot said that he later approached the guard and inquired what had happened and he told him that he had been stationed there and only takes instructions from Marianne and that he did not know Linturi.

He further said that after a while, Linturi came back with OCS Spring Valley, her deputy and two other officers who demanded they come out of the house.

When he went outside to talk to them, the officers’ demanded to know how many people were in the house because there were claims that members Al-shabaab were hiding in the house.

According to Cheruiyot, more police came to the house and he felt his life was in danger and that they were going to kill them thinking they were Al-shabaab.

“If we were to run for our lives, my daughter would have suffered the most as she would not have been able to run away since she had a broken leg,” he said.

The witness told the court that the second incident occurred in December 2018 around noon when police and goons arrived at the house and started destroying the CCTV at the gate.

“After that they tried to break into the house,” he added.

He said that all this time, Kitany and the children were upstairs.

When he saw this, he said he told his daughter and the house help to go and hide while he hid in the bathroom.

“They came in and identified where some of us were roughed up,” he added.

He further told the court that six women who also claimed to be wives of Linturi were asking where Kitany was.

He however said they were not able to identify her since she was in company of three other women.

“I secured the children and Kitany later went to court and obtained orders not to vacate the house,” he said.

He however said he could not leave his daughter there any more out of fear.