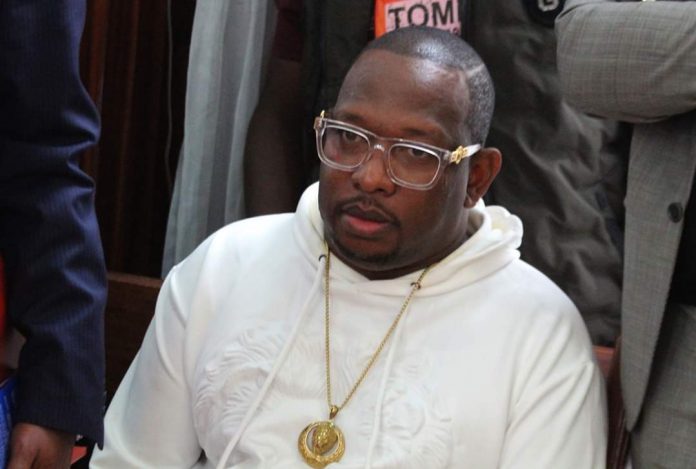 Nairobi Governor Mike Sonko has filed a fresh application seeking to quash the entire Sh 357 million graft charges saying that the evidence obtained by EACC is illegal as he was not informed of the said investigations.

In his documents filed in court, Sonko says the charges against him are based on evidence from investigations conducted by the Ethics and Anti-Corruption Commission into his bank accounts.

“The officers already had the information they are purporting to get from the said banks on September last year when they interviewed me. The commission and the DPP used the information from the bank statements to prefer charges against me in the graft case and the amended charges,” he says.

“The manner in which the Directorate of Criminal Investigations violated her rights to privacy obtained the evidence of her bank accounts was illegal. They acquired the documents in misuse of the court order and misrepresentation,” ruled Judge Helen Omondi.

Sonko says the officers of the commission violated his right to be notified of the intention to investigate his bank accounts.

He adds that the evidence obtained during the investigations into his bank accounts by officers of the commission without following due process was a violation of his right to privacy.

“The constitution provides that evidence obtained in a manner that violates any right shall be excluded if the admission of that evidence would render the trial unfair or would be detrimental to the administration of justice,” reads the court documents.

In December last year, the DPP presented two charge sheets against Sonko and several other county officials and business entities.

In the first file he was accused of embezzling county funds to the tune of Sh 24.1 million. The second file he was faced economic crimes, abuse of office, unlawful acquisition of property and irregular payments that saw the county lose Sh 357 million.

He was later released on a cash bail of Sh 15 million and barred from accessing his office.

The DPP has since served Sonko with an amended charge sheet dated January 27, 2020 which he is yet to take fresh plea.

Sonko however wants the DPP stopped from prosecuting, continuing with prosecution or instituting criminal prosecution against him on illegally obtained evidence from unlawful investigations of his bank accounts.

“A charge is the basis of a criminal case and if found to be based on illegally obtained evidence, then the prosecution cannot stand,” says Sonko.

Further, the governor says that the commission issued notices dated January 28, 2020 to Kenya commercial bank, cooperative bank of Kenya, first community bank limited, diamond trust bank Kenya and equity bank of Kenya for provision of information and documents. The said notices have not been issued to Sonko personally but have been issued to banks and copied to him for information.

The said notices issued by the commission to the said banks are to purportedly assist the commission in its investigations in corruption allegations at the Nairobi county government offices for the period between January 1,2012 and December 31 last year.

The county chief also adds that the fresh notices are irregular, unlawful and illegal because the commission has the information that it is purporting to get from the said banks.

Sonko claims that the commission have realized that they obtained information from the various banks illegally, without his consent, knowledge or involvement and they are now issuing new notices after the fact to try and cover up their error of omission.

“The EACC is using the notices to try and cure an already existing illegality. Going by the law, the officers of the commission are obligated to issue me with a notice indicating that they wish to investigate my bank accounts before obtaining warrants to investigate them,” he says

Meanwhile ,Milimani chief Magistrate Douglas Ogoti will today afternoon (Thurday) rule on whether it will release Sonko’s passport to enable him travel outside the court.

The DPP though James Kihara Vehemently has opposed its release but Sonko urged the court to have it released as has been invited to attend the tenth session of the World Urban Forum which takes place from February 8 to 13 2020in the United Arab Emirates.

Through lawyer George Kithi, the governor said his Kenyan and Diplomatic passports are in custody of the court having deposited them on December 11, 2019 as a condition to have him released from detention on bond terms.

“The forum is important to the people of Nairobi as it is a strategic opportunity for multi-stakeholder cooperation in the implementation of the New Urban Agenda and the sustainable Development Goals. Especially in making cities and human settlements inclusive, safe and resilient and sustainable,” said the lawyer.

Kihara said that Sonko having been barred from accessing his office last December by the anti-corruption court cannot travel to UAE for official duties to represent the Kenya’s capital city.