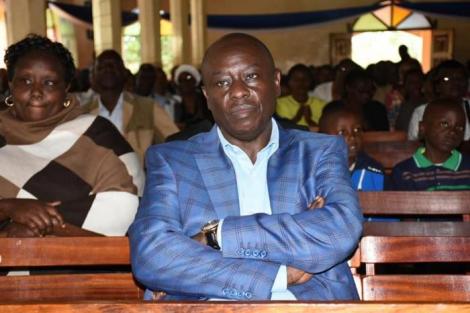 The accounts of Mathira MP Rigathi Gachagua, an ardent supporter of Deputy President William Ruto , have been freeze for 90 days over a case of complex money laundering schemes and benefiting from proceeds of crime involving public funds.

“Preservation orders are hereby issued prohibiting Rigathi Gachagua, his employees, agents, servants or any other person from transacting, withdrawing, transferring or dealing with Kshs 200,773,228.33 being held in his three bank accounts held at Rafiki Microfinance bank under his name,” Judge Onyiego said.

“Preservation order is hereby issued prohibiting Jenne Enterprises limited, it employees, agents, servants or any other persons acting on its behalf from transacting, withdrawing, transferring or dealing in any manner howsoever Kshs. 1,138,142.95 million at Rafiki Microfinance bank in the name of Jenne enterprises,” ordered the court.

The director of Asset Recovery Agency Muthoni Kimani was directed to Gazette the preservation order within 21 days.

The accounts will remain frozen for 90 days pending a petition for forfeiture to the government.

Documents filed in court showed that within seven years the MP received Sh5.8 billion which included funds from companies or business entities which had received funds from government ministries, agencies and county governments.

The agency rushed to court to prohibit Mr Gachagua from dealing or transferring the funds.

The funds were later transferred to companies or businesses entities associated with Gachagua and ultimately to his personal accounts.

The agency claim that on diverse dates between May 2013 and May 2020, Gachagua personal accounts at Rafiki Microfinance bank received suspicious funds amounting to Kshs. 5,832,671,354.19.

“That within the said period there were massive suspicious cash withdrawals, transfers, inter and intra bank transfers from other accounts to the accounts under investigations and other bank accounts owned by Gachagua in suspicious complex money laundering schemes,” the agency said.

The recovery agency further states that part of the suspect funds received from the government ministries, government agencies and county government were later transferred to two accounts numbers which are fixed deposit accounts in his name with total Kshs. 200,000,000 million at Rafiki Microfinance bank.

“There are reasonable grounds to believe that the suspects bank accounts were used to conduit of money laundering in efforts to conceal, disguise the nature, source, disposition and movement of the illicit funds and should be preserved,” the agency submitted to court.

The agency said unless the court issued the orders sought, Gachagua and Jenne Enterprises limited are likely to withdraw or transfer the funds and thereby benefit from proceeds of crime contrary to the law.