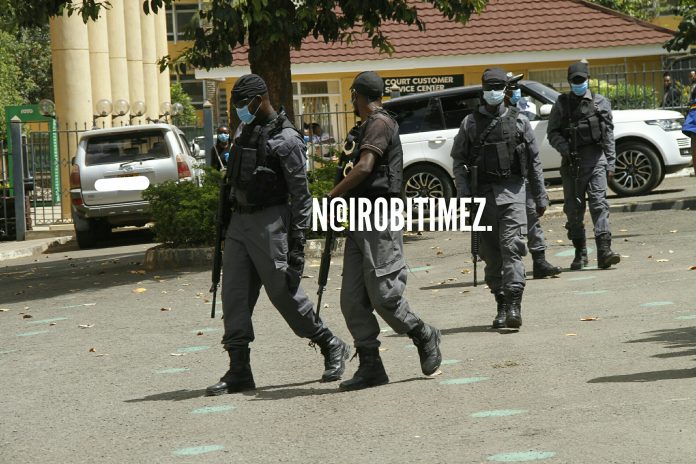 A contingent of heavily armed anti-terror commandos were on Tuesday afternoon deployed around the Milimani Law Courts ahead of the long awaited judgment of three suspects implicated in the 2013 Westgate mall attack.

The officers from a special unit dressed in dark grey military combat arrived at the courts at around 2pm to ensure security was tight in and around the court buildings.

The officers took vintage locations until 5 pm when the three suspects were whisked away after the trial Magistrate failed to read his judgement for fifth time.

Armed with assorted rifles the officers caused a stir around Milimani Law courts. Some wondering whether the country had such officers since they haven’t seen them before.

The officers were assisted by officers from Kenya police and prisons.

Chief magistrate Francis Andayi was expected to pronounce his judgement against the suspects accused of aiding the four attackers, believed to have been killed in the building during the attack.

They face charges of conspiring to commit terrorism, among others.

Hassan Abdullahi and Ahmed were found to have a case to answer but the court freed their co-accused in January 2019.

More than 145 witnesses testified in the case.

Two weeks ago, the suspects complained over ‘harsh’ prison conditions as they awaited Judgement.

Ahmed informed the court that he needed blankets because to survive the cold nights while Abdullahi complained of bad diet as they asked the court to intervene.

He claimed that they were forced to take sugarless porridge for breakfast.

The third accused also complained that he could not see well.