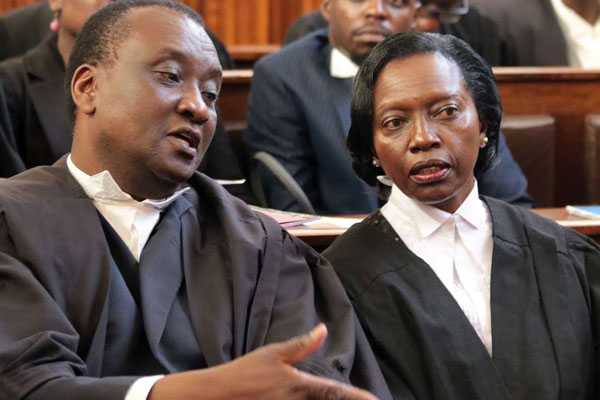 Former Justice Minister and Narc-Kenya leader Martha Karua has been awarded Sh2.7 million by a regional court after the Supreme Court refused to hear her election petition appeal, against Kirinyaga governor Ann Waiguru.

“Consequently, with utmost respect, we find that the impugned Supreme Court decision did fall short on the said judicial organ’s constitutional duty and curtailed the applicant’s right to access to justice,” judges Monica Mugenyi, Charles Nyawello and Charles Nyachae ruled.

The court awarded her US$ 25,000, which will attract interest of 6 percent every year, until payment in full.

Ms Karua, who lost the 2017 Kirinyaga gubernatorial race to Ms Waiguru, moved to the regional court accusing the Supreme Court for failing to uphold the rule of law and knowingly dispensing injustice.

Attorney General Paul Kihara challenged the case saying it was tantamount to an appeal against the Supreme Court’s decision.

Ms Karua’s case was first struck out by Justice Lucy Gitari for lack of evidence but she successfully appealed and the matter was referred back to the High Court only to be struck out for the second time.

Her subsequent appeal was also dismissed by a bench of three court of appeal judges because it was time-barred. Appellate Judges Roselyne Nambuye, Hannah Okwengu and Gatembu Kairu on grounds that the hearing and determination of the appeal exceeded the six-month deadline, within which the election petitions should be concluded.

A bech of five judges of the Supreme Court also dismissed the appeal, forcing her to move to the regional court.

She argued that the failure of the Supreme Court to hear the case on merit, particularly the thorny issue of the lost or stolen electronic evidence, was akin to condoning the subversion of justice. She accused the court abdicating its role by denying her day in court.

The judges said the matter before the Supreme Court was no longer an electoral matter but a search for constitutional solution to a legal problem.