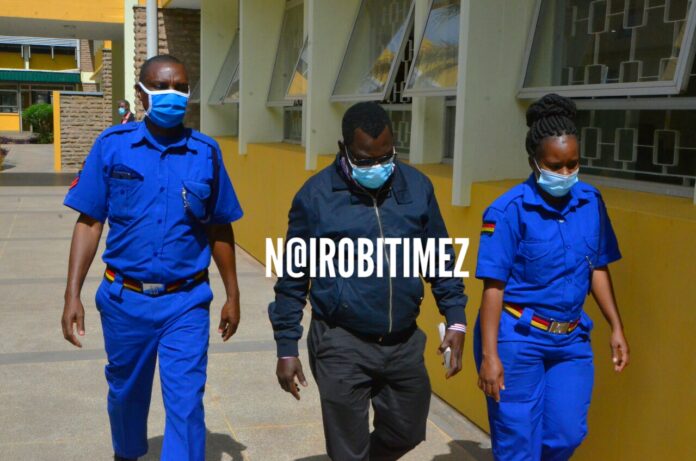 The political career of the convicted Karen Member of Nairobi County Assembly David Mberia has come to an abrupt end after his attempts to quash his conviction was dismissed by the High Court.

Mberia had challenged his conviction and sentence as well as the decision barring him from holding public office but High Court judge Mumbi Ngugi dismissed the appeal saying it lacked merit.

The Judge said Mberia did not place anything before court that would entitle him to suspend the decision, pending appeal.

“The question of whether or not the speaker will declare his seat vacant as a result of conviction is not a question for determination by this court. In the results, the application for stay of judgment and sentence is dismissed,” ruled Judge Ngugi.

Upon conviction by the Anti-Corruption Magistrate court, Mberia filed an application seeking to suspend the judgement pending hearing and determination of the appeal.

He also sought to stop the execution of the judgement by the Speaker of Nairobi county assembly from declaring his seat vacant.

The MCA was found guilty of corruption and barred from holding public office.

Justice Mumbi Ngugi further declined to suspend the decision saying she has to hear from all parties before issuing any orders, for the status quo to be maintained.

The Karen MCA was found guilty of demanding and receiving a bribe.

He was fined Sh700,000 or serve one year in jail. He paid the fine but immediately moved to court, seeking to stop the Speaker Benson Mutura from declaring the seat vacant.

“At this stage in the proceedings and bearing in mind that I have not heard the parties substantively. I am not satisfied that the circumstances of the case merit the grant of orders staying execution of the sentences or orders maintaining the status quo,” the Judge said.

Through his lawyer Titus Koceyo, Mr Mberia said he was apprehensive that the seat would be declared vacant, rendering his appeal useless.

Mr Mberia was found guilty of conspiracy to commit the offence of corruption and bribery. He and two other MCAs had been accused of demanding a bribe of Sh1 million from the owners of Kiragu Waichahi School in Pumwani, Kamukunji.

He was in a committee of the Culture and Social Services Committee, and they were accused of demanding the bribe from the director of the school, in order to prepare a favourable report, to counter the initial allegation they had made to the County Assembly that the school was illegal.

In the judgment, chief magistrate Thomas Nzyoki said there was overwhelming evidence that Mr Mberia received the money. “It is not in doubt that the accused person is a state officer and therefore subject to the high integrity standards. He is also mandated by law to observe the principles and values enacted under the Leadership and Integrity Act,” the Magistrate said.