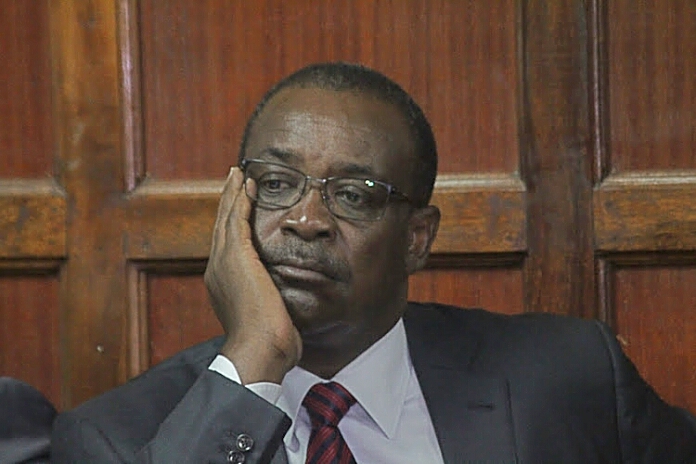 The Ethics and Anti-Corruption Commission (EACC) has filed a fresh petition before High Court Anti-Corruption Division seeking to recover Sh58 million from former Nairobi governor Evans Kidero and 13 others.

According to the anti-graft agency, the said monies were allegedly syphoned from city Hall in a corrupt scheme.

Through Mulki Umar, EACC wants the former governor, Nyakach MP Joshua Aduma Owuor, former Nairobi Mayor John Ndirangu, George Wainaina and their accomplices to refund the monies which they received from a lawyer who has since died.

The money was paid to the law firm of Wachira Mburu Mwangi and Cocmpany advocates, for representing the defunct Nairobi City Council in a case filed by a ghost company.

The anti-graft body wants Kidero to return Sh 14 million, which he corruptly received from a firm known as the Cups limited on January 7, 2014.

Cups Limited, associated with former Mayor Ndirangu, is said to have received the Sh15 million from lawyer Stephen Mburu (deceased) and wired Sh14.4 million to Kidero.

The agency through documents filed in court argue that that on behalf of the county government of Nairobi county it is entitled to directly trace the aforesaid amount of Sh 14 million into and claim equitable title to service apartment (known as Gem Apartment) on LR Number 205 of 46 located within Riverside area in the county of Nairobi which was constructed on the instructions and payments by Kidero with knowledge that the said assets were traceable to proceed of crime and tainted property.

Investigators adds that Kidero dishonesty received the said in breach of trust and or breach of fiduciary duty on his part and traceable to proceeds of crime and tainted property.

The new move by EACC to recover the funds arose in 2011 following a suit filed in court against the Nairobi city council by Kyavee Holdings.

According to the report, the legal fee claim was a fraudulent scheme set to defraud the county government of Nairobi as the said fee claim was founded on false claim, by a non-existent company and intentionally filed by an unqualified person with the intention of rendering the suit incompetent.

The agency says that it launched investigations into the said complaint and established that on December 16, 2010 Kyavee Holdings Limited through the firm of M/S Roy Ouma and Co. Advocates filed a case at the Commercial Division of Milimani Law courts against the city county of Nairobi.

In the commercial suit the company alleged that in December 31, 1996 the city county of Nairobi had allocated to Kyavee Holdings Limited a parcel of land measuring 1.720 hectares for which it paid Sh536,667.

Kyavee Holdings Limited said that it intended to develop a five star hotel on the said property but in November 1999 the city county of Nairobi allocated the suit property to a third party who immediately undertook extensive developments on the said land.

Because of the second allocation, Kyavee sued City Hall demanding Sh3.15 billion for loss of profits.

The commission claim that Investigations revealed that the commercial case by Kyavee Holdings Limited was solely instituted with the intention to defraud the county government of Nairobi Sh 68,761,169

This was because Kyavee Holdings Limited was neither incorporated as a limited liability company at the time of filing the case. The claim was also false because the land was not available for allocation as it had been allocated to Mariakani primary school in 1968.

“Contrary to the claim made by Kyavee Holdings Limited in Nairobi High Court commercial case number 875 of 2010, the suit property therein known as LR 209/ 8254 was allocated to Mariakani Primary School in South B in 1968 and was never available for allocation or alienation to Kyavee in the commercial case,” EACC says.