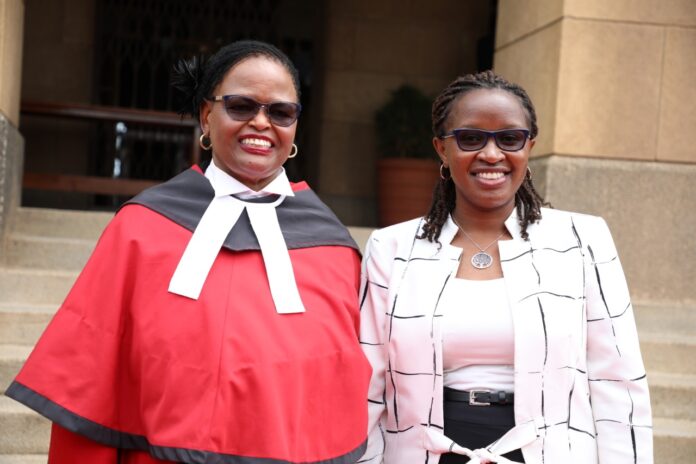 Law Society of Kenya has congratulated Chief Justice Martha Koome for her appointed as Chief Justice and President of Supreme Court of Kenya.

“This demonstrates the commitment by the Country to ensure the attainment of Kenya’s constitutional gender equality and one of the seventeen Sustainable Development Goals established by the United Nations in 2015,” said CEO Mercy.

Wambua added that CJ Koome takes office at a time when there is a developing culture of impunity and attacks on judicial officers by parties dissatisfied with court orders.

She said LSK condemns in the strongest terms possible the continued attacks on judicial officers and assured Chief Justice of unwavering support as she leads in the fight against the culture of impunity and intimidation of judicial officers.

Wambua said the Council looks forward to working with Koome, supporting her efforts and those of the entire Judiciary towards promoting judicial independence, constitutionalism, access to justice and advancement of the rule of law, heralding an era of pragmatic respect for court orders.

“We are confident that the Chief Justice will prioritize the realization of sustainable administration through completion of the judicial transformation journey, digitization of judicial operations, devolution and improved infrastructure,” she added.

“As Lawyers, we assure the Chief Justice, Martha Koome of our support in her transformative journey and CJ Koome will never walk alone during her tenure as the Chief Justice of the Republic of Kenya,” Wambua said.

She added that LSK prayers are with the Chief Justice and her team as she works with dedication in fulfillment of the Judiciary’s mandate and the obligations on her in-tray need not be re-emphasized.

” We are confident that she has the wherewithal, knowledge, skill, diligence and the correct temperament demonstrable from her illustrious career, the testimonials of colleagues in the profession, her exemplary performance during the televised interviews undertaken by the Judicial Service Commission and subsequent vetting by Parliament, ” she said.

She said she new CJ has a rich history of a successful career attributable to her enduring humility and servant leadership and as the President of the Supreme Court, it is our sincere hope that she will exercise remarkable influence in promoting justice, constitutionalism and theg rule of law.

The Council also congratulated Justice William Ouko on his appointment as a Judge of the Supreme Court.

LSK said Justice William Ouko’s appointment as a judge of the Supreme Court will certainly enrich the jurisprudence emanating from the highest court in Kenya.