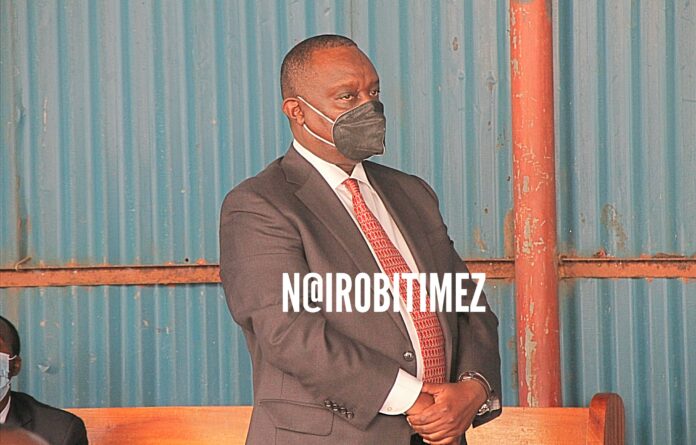 Former Treasury CS Henry Rotich has vehemently opposed the amendment of charges against him in the Sh63 billion Kimwarer and Arror dams’ case.

The charged Cs, together with former Kerio Valley Development Authority (KVDA) managing director David Kimosop and an ex-director of the Resource Mobilization Department at the Treasury Jackson Njau opposed the consolidation of their files saying it will undermine their rights to access to Justice.

The DPP also indicated his intention of dropping some of the accused persons, who have opted to become witnesses against Rotich and other accused persons.

The consolidation of the two case files will see the number of accused persons drop from 18 to 9, while the number of counts will be reduced from 40 to 30 in the two matters.

However Rotich and Kimosop through lawyers Kioko Kilukumi and Philip Nyachoti respectively, opposed the consolidation saying DPP has not put forth a good reason so as to persuade the court to grant the request.

According to them, the proposed amended charge sheet clearly violates express constitutional provisions and therefore null and void.

“It is therefore beyond contestation that the proposed amended charge sheet does not comply with the constitutional provisions granting the power to institute criminal proceedings”, he adds.

In the court documents, they argued that the DPP cannot discontinue a prosecution without the permission of the court. Rotich adds that he is not opposed to the release of any accused person, whether or not such person will be a prosecution witness at the trial.

“For the avoidance of doubt, the 1st accused is not opposed to the release of any accused person, whether or not such person will be a prosecution witness at the trial”, he adds.

According to Rotich it was the prosecution which from inception separated the cases for the very obvious reason that they were separable for efficacious and speedy trial.

“It is the prosecution which from inception separated the cases for the very obvious reason that they were separable for efficacious and speedy trial. Where has the wisdom of the separation evaporated to?

He also pointed out that he moved to the High Court challenging his prosecution on the basis that the charge sheet is faulty.

Rotich says the amendment will invariably affect and defeat the orders he has sought from the High Court, in the event the court was to grant those prayers.

He further adds that it will only be fair and just for this subordinate court to await the hearing and determination of the Petition by the superior court for orderly administration of justice.

Rotich further argue that in the proposed amended charge sheet, he has a total of 19 counts and that he has nothing to do with the other eleven counts brought against the other accused persons.

“Many prosecution witnesses will be called in an attempt to prove those charges and I will be expected to sit through as a spectator, while the time for a speedy conclusion of my trial is taken away by charges that I have no connection with,” he adds.

Lawyer Nyachoti argue that the DPPs application does not meet the threshold for consolidation as the two suits do not present a common question of law and fact and therefore no nexus whatsoever.

Court will dekiver a ruling on 29.