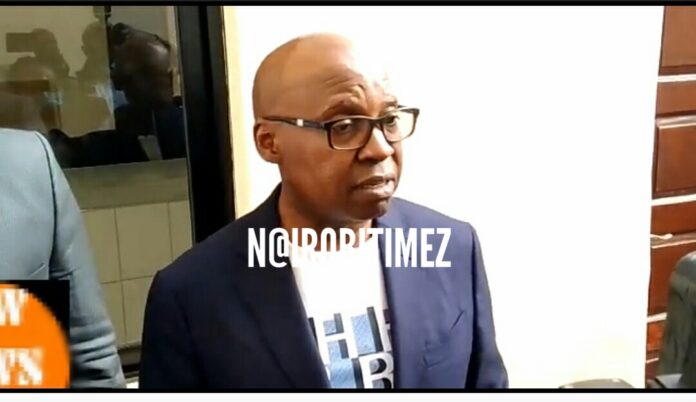 An activist has filed a case seeking to compel the Director of Criminal Investigations (DCI) George Kinoti to arrest businessman Jimmy Wanjigi for possession of illegal firearms and ammunitions.

According to papers filed in court Memba Ocharo argues that Wanjigi’s conduct has previously been questionable while in possession of firearms.

Through llawyer Danstan Omari, activist says that Wanjigi possesses a grave danger and risk to the members of the public as no one citizen should have in their custody 688 ammunitions and about 11 guns.

He wants the court to declare inspector General Hillary Mutyambai and Director of Criminal Investigations George Kinoti are duty bound to provide security to members of the public and legally under an obligation control the licensing of civilian firearms and to revoke the interested party’s firearms certificate number no. 9522 pursuant to section 23 of the firearms Act of   justifiable grounds and in compliance with the rules of natural justice as decreed by Justice Mativo.

“Wanjigi will soon receive the firearms and ammunitions that were initially confiscated yet the Firearm Licensing Board has never conducted a due process that is in accord to the law to have Wanjigi firearms certificate procedurally revoked in a manner anticipated in the ruling of this court in Republic v Firearms Licensing Board & another; Ex parte Jimi Wanjigi[2019]eklr,” Ocharo says.

Memba says that Wanjigi is a former Inspector of Police and was stripped off all his police powers and ordered to surrender all his firearms and ammunitions in his custody.

This was allegedly after numerous incidences and complaints about his misuse of firearms.

Memba claims that long after Wanjigi was dismissed from employment with the Police Service for misuse of firearms in threatening and intimidating members of the public, he has nonetheless been a licensed firearms holder.

The firearms certificate was allegedly revoked by the board on January 30, 2018.