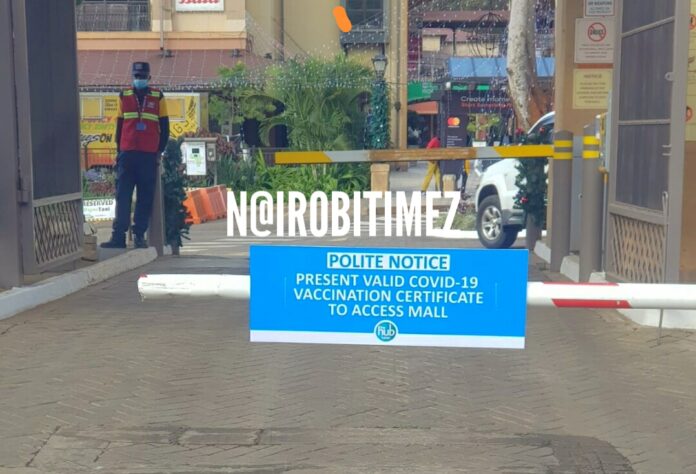 The High Court has extended orders suspending a government directive requiring proof of Covid-19 vaccination before getting in-person services.

Justice Anthony Mrima said the order issued in December will remain in force pending the hearing and determination of a case filed Joseph Aura.

“Conservatory orders are extended pending hearing and determination of the petition. The hearing of the conservatory application is on February 1,” Justice Anthony Mrima clarified.

Lawyer Harrison Kinyanjui, for the petitioner had complained that some malls and eateries were demanding Covid-19 certificate against the court order.

“The Court Order made on December 14, 2021 barring the forced Covid-19 Vaccinations of Kenyans as a precondition to access services is still in place. The CS for Health and his juniors cannot override the Constitution in the name of an edict that has no force of law  contravening Article 94(5) of the Constitution of Kenya. A Court Order must be obeyed”, Lawyer Kinyanjui added.

The lawyer singled out The Hub and the Junction Mall for insisting on the vaccination certificate as directed by Health Cabinet Secretary Mutahi Kagwe.

He said the requirement was undermining the integrity of the court, which suspended the directive.

In an amended petition, Kinyanjui further accused Kagwe of disobeying the court order by directing CAS Dr Mercy Mwangangi to continue to issuing edict by asking business establishments and public offices to ask for proof of vaccination.

“All those shopping Malls, supermarkets and other institutions purporting to enforce such unconstitutional directives and mandating vaccination with substances manufactured by foreign corporations will face Contempt of Court proceedings. We cannot trample on valid Court Orders and turn this nation into a free for all anarchism. Mutahi Kagwe should not elevate his edicts and directives above the Constitution which he swore to uphold, and if he does, the guillotine of Article 2 thereof will accost and annihilate his edicts; not we. Let us be clear about that.” Kinyanjui told the court.

Justice Mrima last year suspended Kagwe’s directive, which was to come into effect on December 21.

Aura moved to court arguing that it is wrong for the government to demand proof of vaccination from Kenyans before getting services.

He said the directive negatively implicates and violates the guaranteed cross section of fundamental rights and freedoms of Kenyans.

He says the directive is contrary to Article 20(1) of the constitution which stipulates that the Bill of rights applies to all laws and binds all state organs and all persons.

Kagwe had said that everyone seeking government services must be fully vaccinated to keep infection rates lower and avoid lockdowns.

But Aura said the pre-condition for Kenyans not to board public service vehicles unless there is proof of vaccination implies that the PSV licensing regime under the National Transport and Safety Authority has been usurped by health ministry in the imposition of a non-existent statutory condition for Kenyans to board and use PSV.

He said barring unvaccinated Kenyans from using public transport is an affront to the right to freedom of movement as people have a right to travel anywhere in the country.