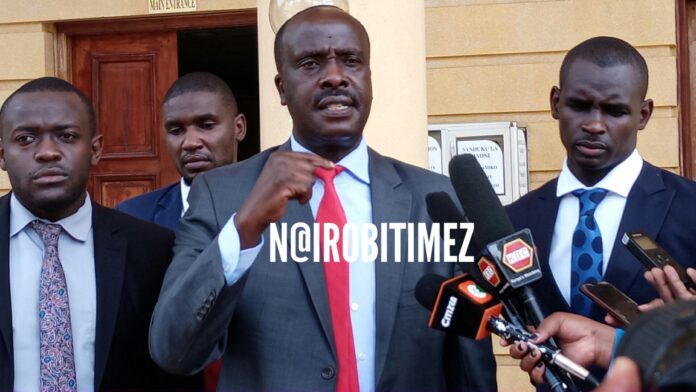 An activist has moved to court to challenge a directive by the Director of Public Prosecution Noordin Haji for the police to investigate Kitutu Chache South MP Richard Onyonka over claims of hate speech.

The MP presented himself before the police in Kisii, soon after the DPP directed Inspector General of Police Hillary Mutyambai to investigate the claims.

But Fredrick Bikeri says in a petition to the High Court that the DPP’s letter to the IG is illegal because Haji was interfering with the mandate of the National Cohesion and Integration Commission.

Through lawyer Danstan Omari, the activist claims the DPP’s directives to the IG, though copied to the NCIC, is a kneejerk and thoughtless reaction. He further said the move was populist and a legal nonstarter as it bypasses the known legal requirements under the National Cohesion and Integration Act.

Bikeri argues that the directive to the IG is misconceived, improper in the eyes of the law, and mischievously made against the express provisions of article 245(2)(b) of the Constitution.

“This is to avoid instances where the guilty are set free on the basis of technicalities born from thoughtless decisions by the law enforcement agencies and officers,” Bikeri says.

He says the said article provides for the Inspector General to exercise independent command over the National Police Service and perform functions prescribed by national legislation.

Bikeri argues that to allow the IG to be pushed and pulled by the DPP is being ignorant to the statutes and the Constitution.

He wants the court to declare that  pursuant to section 25 of the NCIC Act, the investigations of offences prescribed under the Act are the preserve and purely within the sole jurisdiction, authority and function of the NCIC.

The activist further says the DPP’s directive is not only a legal misadventure that undermines the rule of law, the national values and principles of governance and those of public service but is also an invasion to the jurisdiction and the mandate of the National Cohesion and Integration Commission.

“The directive is misconceived, improper in the eyes of the law, and mischievously made as against the express provisions of article 245(2)(b) of the Constitution,” Bikeri adds.

He contends that there is a pressing need that clarity and sanctity is promoted within the borders especially on the investigations and prosecution of hatemongers during the forthcoming elections.