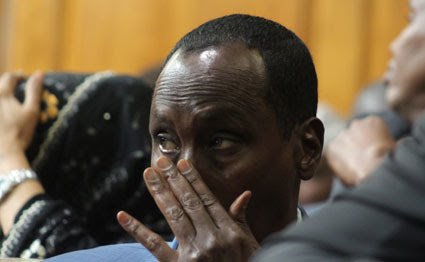 Wajir Governor Mohamed Abdi Mohamud has been ordered to appear in court on Monday next week after the DPP made a request to arrest and bring him in court.

The governor is listed as a witness in a sh 26.1 million corruption case facing three senior county officials and a bank manager.

The DPP has sought a warrant of arrest against him after he failed to turn up in court without giving any reasons.

Governor Mohamud is expected to give his evidence following completion of investigations by the EACC in Wajir county corruption case.

The case is pegged on unprocedural withdrawal of money from the Wajir County government imprest accounts to a tune of Sh 26. 1 million and the same misappropriated.

The accused persons are out on Sh2 million bond each with a surety of a similar amount.

High Court ordered the said company account at Kenya Commercial Bank Wajir branch be frozen for six months pending investigation on alleged misappropriation of money meant for purchase of two motor vehicles for Wajir Governor at a cost of 26 million.

The court also ordered account of Fine Trust Construction Limited at Kenya Commercial Bank Wajir branch frozen for six months.  12 million paid for the purchase of governor vehicle was transferred to the company.

Justice Hedwig Ong’undi further ordered Toyota Land cruiser  VX 8 LC 200 SERIES KCQ 004U should not be disposed of in any manner whatsoever for six months.

The Judge further ordered the said Governor’s Toyota Land cruiser  VX 8 LC 200 SERIES KCQ 004U be immediately placed in the custody of Ethics and Anti-Corruption Commission for inspection and valuation pending conclusion of the investigations.

According to affidavit by investigating officer Eric Otieno, he said they are investigating allegations that 26 million public funds intended to purchase two vehicles for Wajir Governor were misappropriated.