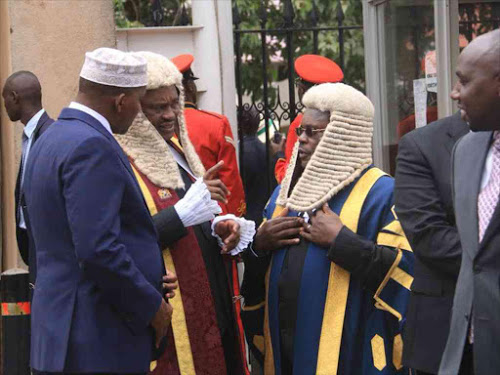 Parliament has asked the high court to stop implementation of an advisory issued by CJ David Maraga to President Uhuru Kenyatta to dissolve parliament.

In documents filed in court, both houses wants President Kenyatta to reject CJ Maraga’s advisory opinion dated September 21, 2020 to dissolve parliament for contravening article 131(2) as read together with article 261(7) of the constitution.

“A declaration be issued that the Chief Justice David Maraga advise in the Advisory Letter dated September 21, 2020 constitutes an infringement of Article 1 on the Sovereign power of the people exercised through the legislative arm of the government” adds parliament.

They further wants high court to declare that the Orders and findings of Justice Mativo in Constitutional Petition No. 371 of 2016, Centre for Rights and Awareness and 2 Others vs Speaker of National Assembly and 6 Others, only binds the 11th Parliament.

Parliament is also seeking declaration that a parliamentary lifespan in Kenya under articles 101 and 102 is for a term of 5 years, and the term of 12th Parliament commenced in August 2017 and expires on August 2022.

According to the two houses of Parliament, they wants court to declare Chief Justice lacks jurisdiction under Article 261 (5), (6) and (7) of the Constitution to interfere with the law-making powers of parliament, particularly the freedom of speech and debate under article 117(1) of the constitution.

In addition, parliament wants a declaration that the principles set out in Articles 27(8), 81(b) and 100 cannot be achieved through legislation, without necessarily amending the constitution to remove the ceiling set out under article 97 and 98 of the Constitution.

It also seeks declaration be issued that the Advisory Opinion by the 1st Respondent dated September 21, 2020 abrogates the Political rights enshrined under Article 38 (2) (a) of the Constitution of Kenya 2010.

Parliament wants to know whether the constitutional principles under Articles 27 (8), 81(b) and 100 can be achieved without affecting the basic structure of the constitution protected under article 255(1)(c) on sovereignty of the people and whether Parliament can legislate under Articles 27 (8), 81(b) and 100 to alter the composition of Parliament without offending the ceilings of representation set out at Articles 97 and 98 of the Constitution.

According to the court documents, parliament questions whether the Chief Justice in his “advise” to the President misconstrued his role in transmittal of the advisory letter and therefore ignored his dual functions in his capacity or exercising a judicial function, an administrative function and if so, whether the advisory justiciable and reviewable by the High Court under article 165(3) of the constitution?.

They also question on whether the Chief Justice misapprehended his Constitutional mandate and obligation under Article 261 (7) and whether having been advised as such by the CJ, the President has any residual discretion under Article 261(7) regarding the dissolution of Parliament, when read together with article 131(2)(a), (b), (c), (d) and (e) of the constitution.

“Whether the advisory letter offends against the principle of parliamentary privileges, immunity and debate under article 117 of the Constitution and whether Parliament as envisaged under the Constitution acts in succession or not, if the answer is in the affirmative or if the order targeted towards the 11th Parliament? ” argues parliament.

They further question whether the Chief Justice can interfere with the ongoing legislative process when the debate on the Representation of the Special Interest Groups (Amendment) Bill 2019 is ongoing or whether he has powers to interfere with the legislative mandate of the 12th Parliament despite the 12th Parliament having two more years to conclude its terms that runs from August 2017 to August 2022.

Members of Parliament and their senate counterparts questions whether Chief Justice can unilaterally dissolve one arm of government as he did without public participation and by exercising his power, the CJ acting under article 261(7) not acting as a co-equal to the other arms of government can determine the fate of the 1st and 2nd Petitioners by the stroke of his pen!