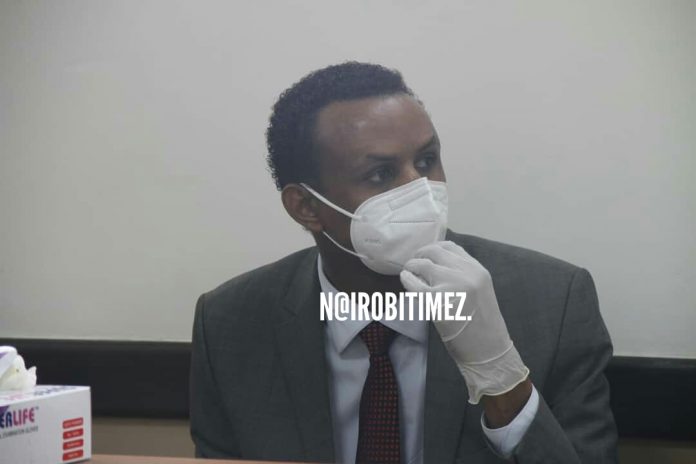 A former Wajir County Secretary Ahmed Sahal has said the county executive held a meeting that resolved to change signatories to bank accounts.

Sahal, who is defending himself against theft of Sh26 million from belonging to the county said the consultative meeting was held by the Governor, his Deputy and other county executive committee members.

He however, said that he was never part of the meeting whose agenda was to change the signatories of bank accounts for the county. “There was a consultative meeting among themselves,” he told the court.

Sahal said there is a letter requesting that the county executive allow the bank to authorise one person as a signatory to the accounts. He denied any involvement to conspire or steal the County funds, adding that no money was lost at the county since there is no audit report.

“I’ve never been called by the Wajir County assembly or Senate in regard to the loss of money in question,” he said.

On its part, the prosecution alleges that the county regulations require that there be two signatories.

During the last hearing, Sahal said the case was meant to settle political scores and he was only a victim of a fight between two top leaders within the County.

He said the investigating officer in the case was used as a political tool to ensure he is behind bars.

He together with Jeff Mworia Kithinji (Head of Treasury and Economic Adviser to the governor) and Daud Abdullah Omar (Finance chief executive and economic planning) were barred from accessing their office unless accompanied by the investigating officer.

The three are further charged alongside Siyad Ibrahim Ahmed, a KCB Wajir Branch Bank Manager, but who was set free after the court ruled that he had no case to answer.

Abdullahi is accused that between 5 of October and 9 of October this year being Wajir County Government Finance and economic planning county executive committee member used his office to confer benefit of Sh 26.1 million to Jeff Mworia Kithinji by unlawfully authorising him as sole signatory of the county government.

Abdullahi is further accused of failing to comply with applicable law and procedures relating to management of public funds by designating one authorised signatory in respect of Wajir County Government imprest account instead of the mandatory two signatories as required.

Sahal was accused of using his office to confer a benefit to Kithinji by purporting that the county executive committee had approved his appointment as a signatory of the county’s imprest account.