The Supreme Council of Kenya Muslims has congratulated the leaders of the Kingdom of Saudi Arabiä and Qatar for signing the agreement to end hostilities that has lasted for the last four years.

The council through the Chairman AL-Hajj Hassan Ole Naado also congratulated and commended the governments of Bahrain, Egypt and United Arab Emirates for also agreeing to end their boycott and blockade of Qatar and restore diplomatic relationship.

The council noted that the agreement to end hostilities was a delicate diplomatic effort by leaders of other countries, especially Kuwait and Oman.

“We therefore commend the leadership of Kuwait and Oman, and other partners that led the dialogue to end the four-year blockade and boycott of Qatar and we are therefore delighted that the end of the blockade and boycott restores the cordial relationships that had existed between the two brotherly neighbors,” the statement said.

The council called the citizens of the countriew to support their leaders and embrace each other in a spirit of brotherhood to ensure that they build prosperous unities for themselves and future generations.

Al-Hajj said the global community looks up to and counts on Qatari and her Gulf neighbor to ensure that agreement translates inta tangible action on the ground to ensure peaceful coexistence in the region.

The council encouraged other countries in the Gulf and other parts of the world that have hostilities towards each other in one way or another to emulate the move and find peaceful resolution of their differences.

In 2017, a coalition of the governments of Saudi Arabia, Bahrain, United Arab Emirates and Egypt accused Qatari of supporting subversive and desterilizing elements across the region.

The accusations were followed by a severance of diplomatic ties and imposition of land, sea and air blockade of Qatari as well as an economic boycott of it’s products.

Qatari was functionally isolated from her Gulf neighbors, putting significant strain on the socio-economic welfare of her people.

Besides, the blockade and boycott escalated political and security tensions in a region that already had it’s fair share of security challenges, which challenges often have adverse affects on internetional security and commerce. 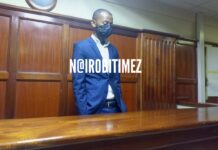 FUGITIVE WANTED IN USA TO REMAIN IN COURT PENDING DETERMINATION OF EXTRADITION CASE.