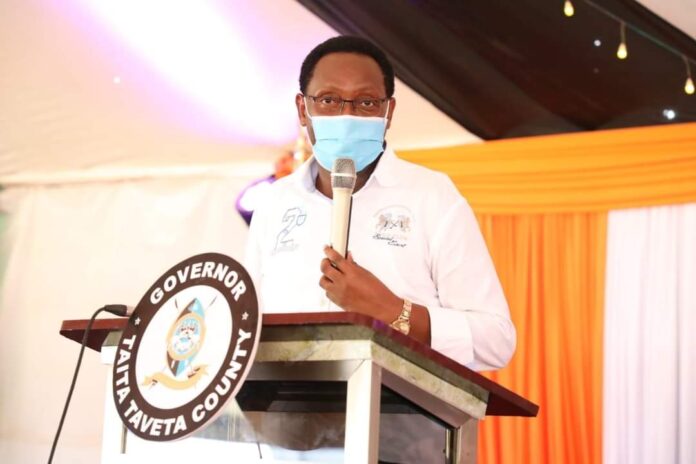 Taita Taveta Governor Granton Samboja might not be off the hook yet after a new case was filed in court challenging his academic papers.

“A declaration that any actions or omissions which howsoever and by whosoever have been undertaken based upon or taking into consideration, or on the basis of, or are founded on the fake certificate, or are in any way related to the impugned certificate, diploma, and degree purportedly issued by Kenyatta University to Granton Graham Samboja are invalid, null and void ab initio,” Omtatah urged the court.

He further sought a declaration that by uttering the fake certificate, diploma and degree to Ethics and Anti-Corruption Commission (EACC) and Independent Electoral and Boundaries Commission (IEBC) to be cleared to view for the gubernatorial seat, was illegal.

He says he filed in the public interest after another judge dismissed a similar petition for lack of jurisdiction.

“Hence, some of the information and supporting documents relied upon in this motion are from Constitutional Petition No. 382 of 2017,” he added.

Omtatah added that under Kenyan law, since only Kenyatta University is authorised to issue certificates, diplomas, degrees and other awards in its name, the legality of these fake educational certificates is not only in their use; it is also in the acts of making and holding them.

According to Omtatah certification is the formal attestation or confirmation of certain characteristics of an object, person, or organization.

And because a certificate is a credentialing document used to declare that individuals are knowledgeable enough in a given occupational area and are competent to practice in that area, under Kenyan law, in matters education, this confirmation is provided only by approved institutions of learning or training.

“The purpose of a credential certificate in any field is to both protect the public from quacks and to guarantee that a person who holds the credential has met minimum professional and ethical standards,” he added.

According to his court documents, fake certificates make it difficult to hire the right people for the right job and employers hire their workers based on certifications because certification indicates that one has met a certain standard of competence. Hence, ensuring a person is as qualified as they say they are is crucial for the integrity and authenticity of any work force.

He claims they are also a danger to the general public in many ways, including that they allow quacks to perform tasks or duties they are not qualified to do, and they affect the morale of learners, especially the youth, as they are a disincentive as there is no point for one struggle and work hard to acquire certifications which can simply be scammed.

“Fake educational certificates are a serious matter that warrants the intervention of this Court to protect the public and there are at least two types of academic fraud. This suit concerns one type, the direct forgery of academic certifications where counterfeit or inauthentic Kenyatta University certificate, diploma, and degree were fabricated,” he said.

He added that the certifications were not issued by Kenyatta University.