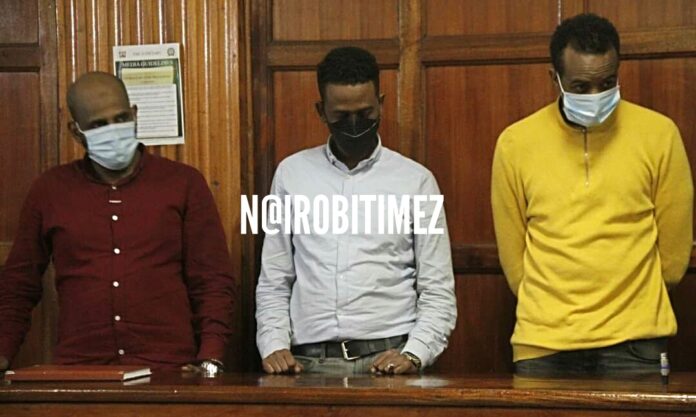 Three men have been charged with obtaining Sh1.6 million and being in possession with handcuffs belonging to disciplined forces.

Abdkarir Abass Nuno(pilot) , Hussein Sheik Ali and Sadiq Hussein Mohamed appeared before Milimani Senior Principal Magistrate Benard Ochoi after they were found with handcuffs suspected to have been stolen or unlawfully obtained.

The court heard that they were found with government stores (pair of handcuffs) belonging to disciplined forces suspected to be stolen or unlawfully obtained on November 30 at around 2030 hours.

They were inside a vehicle at Rubis Petrol station along Ojijo in Westlands sub-county, Nairobi.

The prosecution further said that with others not before court, Nuno obtained Sh1.6 million from Margaret Delorme by falsely pretending he was in position to lease a football field in Kilimani Primary School.

He allegedly committed the offence on diverse dates between June 1 and August 30 last year at Westlands in Nairobi.

He is further accused that on June 3 last year, at unknown place, and with intent to defraud he forged lease agreement of football club in Kilimani Primary School purporting it to be genuine lease agreement signed and issued by Ministry of Education.

They denied the charges and were released on a cash bail of Sh400,000 each.