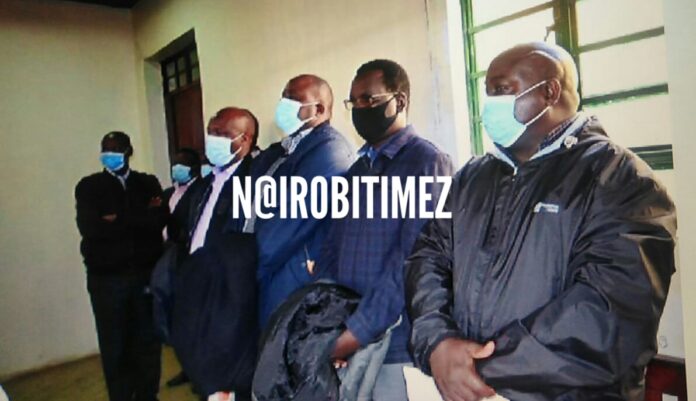 Top Kenya Power and Lighting Company officers have been detained for eight days, pending conclusion of investigations of alleged sabotage at the power utility firm that led to countrywide blackout a week ago.

The Directorate of Criminal Investigations moved to court after arresting the 10 KP officers and sought to detain them for 21 days at Muthaiga Police station, pending conclusion of the probe.

Chief Inspector Keith Robert attached to the DCI HQ serious crime unit told the court he is investigating a case of sabotage and commission of terrorism.

The 10 were brought before Kahawa Court Magistrate Boaz Ombewa who reduced the days to eight.

Their lawyer Danstan Omari had opposed their detention saying claims that the officials might escape are baseless. He said Korir is a top notch chief engineer of ‘monumental personality’.

“Therefore the argument that he is likely to escape jurisdiction is the most founded… in any basis of law and facts …… as am going to be leading you will see secondly your honor the state made application in a 16 paragraph to convince you to detain one of the grounds is that a report was done to the effect that there was vandalism and no action was done state has failed to understand the democracy involving action being taken within the structure of Kenya Power”, Omari told the court.

He added that Kenya power is like this judiciary; it is a democracy that can be tempered for lack of funds and lack of adequate personnel to deploy. It cannot be just a motion and I keep saying there was no action.

“I urge the court to take judicial notice that occasionally the state will say they have no resources to give and the report was done on the 9th of December, the alleged offence and state admits that this matter was escalated in the democracy to the top manager. The top management of Kenya power is the CEO”, Omari further added.

According to Omari, the buck stops at the top management and the selective arrest of managers was questionable.

“Is this the first black out in this country? Are we saying all officers who have served at KP and there were blackouts during their tenure since 1963 should be charged? This is a normal occurrence and not like a terrorist attack,” he said.

He said that on December 9 last year, a report was made at ICD police post by administration police officers who were manning the expressway construction about vandalism of tower number seven.

The same, he said, was also reported by KPLC LANsupport system and the management failed to take any action.

“Due to management and inaction, the vandalism was extended to the neighboring tower forcing four Kiambere-Nairobi towers number 11,12,13 and 14 to collapse on January 11 this year,” CI Keith told the court.

The fallen towers caused a countrywide power outage leading to business losses and interruptions of critical and crucial services rendered by various entities to the citizens of Kenya.

“Due to management failure and inaction which led to the collapse pf the four towers and power blackout, the provision is of essential and emergency services were disrupted and interfered with which constitute an act of terrorism,” the officer added.

The officer added that the investigation intends to invite independent engineers to assess the probable loss of tower collapse and review engineers’ incident report.