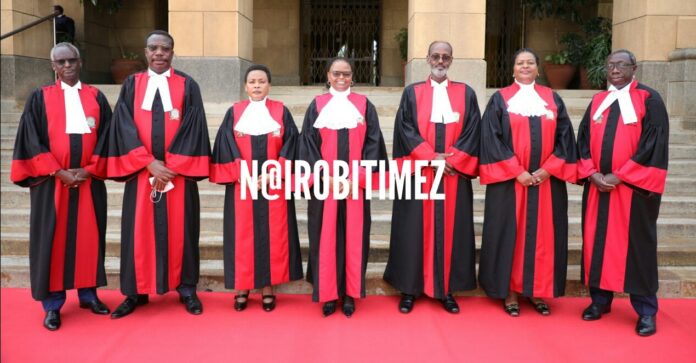 The fate of the Building Bridges Initiative (BBI) Bill, which was being pushed by President Uhuru Kenyatta and his handshake partner Raila Odinga now lies with the seven judges of the Supreme Court after lawyers made their final submissions on Thursday.

For three days, Kenyans were treated to high octane arguments by the country’s biggest legal minds as they argued for or against the bill, after it was shot down by the High Court and Court of Appeal last year.

The Judges led by Chief Justice Martha Koome will decide whether the doctrine of Basic Structure is applicable in Kenya, whether the President can initiate changes/amendments to the Constitution and whether a constitutional amendment can only be initiated by Parliament through a parliamentary initiative or through a popular initiative.

Other issues include whether civil or criminal proceedings can be instituted against the President or a person performing the functions of the office of the President, whether there was Public Participation in the BBI process and the question of quorum at the Independent Electoral and Boundaries Commission (IEBC).

Veteran Lawyer John Khaminwa who represents Kituo cha Sheria almost broke down while appealing to the Judges not to forget the history the country went through during the Nyayo era.

An emotional Khaminwa said it was unfortunate that some individuals wanted to reverse the gains made over the years and take the country to the Nyayo era.

“We should never forget the history of the country, we still have the elements in the country if you do not stand firm they want to take us back to the nyayo era,” said Khaminwa.

The veteran lawyer argued that the Kenyan constitution was drafted in such a manner that it was not amendable, the idea being that allowing the amendment would leave the country with no constitution.