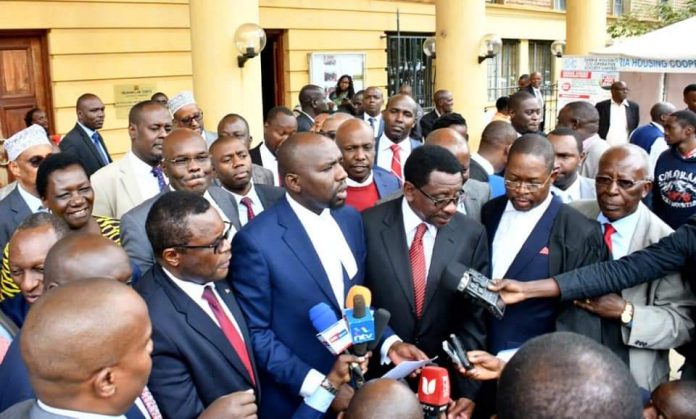 The battle of supremacy between the National Assembly and the Senate over the concurrence of the speakers of both houses before passing certain bills has now been settled with the High Court nullifying 23 pieces of legislation.

A bench of three judges ruled that the laws, which were passed by National Assembly without consulting the Senate, were a nullity.

“A declaration be and is hereby issued that where the Speakers of the House concur that a Bill is one that concerns Counties, pursuant to Article 109(4), the Bill must be passed in accordance with Articles 110 to 113, 122 and 123 of the Constitution and the Standing Orders of both Houses and is not subject to Article 114 of the constitution,” the court ruled.

Today’s decision settles a contest between the two houses and reinforcing Senate’s argument on the requirement to be consulted by the National Assembly.

The judges also declared that the provisions of Standing Order 121(2) of the National Assembly Standing Orders is inconsistent with Articles 109(4), 110 to 113, 122 and 123 of the Constitution and is therefore null and void.

“A declaration be and is hereby issued that Standing Order 143(2) to (6) of the National Assembly Standing Orders is inconsistent with Articles 109(4), 110 to 113, 122 and 123 of the Constitution and is therefore null and void”, ordered further.

The Court further declared that an Act of Parliament has to comply with the legislative process required of both Houses by participation of both Speakers as required under Article 110 (3) of the Constitution.

Some of the bills affected include the Computer Cyber Crime Act, Finance act 2018.

However, the court suspended it decision to nullify the Bills for nine months to allow the senate and the national assembly to comply with the law.

“In the circumstances of this case we shall suspend our orders nullifying the impugned Acts for a period of 9 months from the date of this judgment within which period the respondents ought to have complied with the provisions of Article 110 (3) of the Constitution and regularised these Acts and in default they stand nullified. Orders accordingly”, said the judges.

The bills that have been declared unconstitutional include The Public Trustee (Amendment) Act, Building Surveyors Act, 2018, Computer Misuse and Cybercrimes Act.

Senate moved to court against National Assembly challenging the laws passed without their involvement arguing that a number of them relate to counties and the devolution process.amd therefore they should be involved