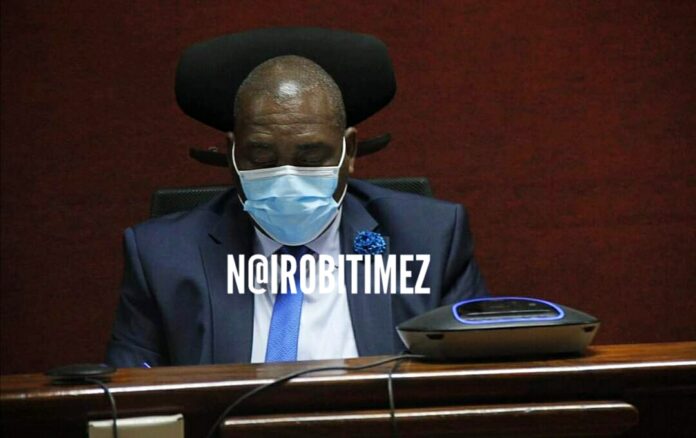 The Senate has suffered a major blow after a judge ruled that it has no powers to oversight funds received through grants, loans and revenue generated by the counties.

The High Court further granted orders restraining Senate or any of its committee from summoning governors and county government officials to appear before the House to answer queries on Auditor General Reports on roads maintenance levy funds and funds received from World-Bank Kenya urban Support program.

In a ruling, Judge Anthony Mrima also restrained Senate committee on Roads and Transportation from fining or issuing warrants of arrest against governors or county government officials on matters arising from the report of the Auditor General on roads maintenance levy funds.

The judge also suspended other proceedings regarding the case pending hearing and determination of the appeal, raising similar issues, which is pending before the Supreme Court.

The court issued the orders after the Council of Governors challenged the summons and fines imposed on them, for failing to honor the senate summons.

COG argued that the senate’s oversight role over nationally collected revenue to counties is certainly not identical to county assembly’s oversight and this means senate cannot scrutinize county expenditures in the same way that the committee and general assemblies of the county legislatures can.

“At most, if a county assembly is considering a financial Auditor – General’s report, the senate should not be simultaneously seized of the matter in a manner that undermines or competes with the county Assembly,” the court heard.

COG through lawyer Peter Wanyama said several governors have been summoned by the Senate to consider the reports for the funds, despite concerns regarding the legality of the senate’s powers over the matter.

He said the senate has summoned governors threatening them with fines and arrests and three of them, Mandera’s Ali Roba, Hillary Barchok (Bomet) and Paul Chepkwony (Kericho) are set to appear before the senators.

According to Mr Wanyama, once a report of the Auditor General has been submitted to the county assembly, the Senate cannot concurrently handle the same matter.

Senators have asked the High Court to dismiss a petition seeking to block them from summoning governors over reports on roads maintenance levy fund and World Bank funded Kenya Urban Support programme.

The Senate told the court that Governors have failed to appear before the Roads and Transportation Committee despite invitations.

The court heard that the governors have also failed to honour lawful summons issued by the Senate and they were, therefore, in contempt of lawful orders. COG rushed to court to block senators from summoning them to discuss the Auditor General’s reports on the Roads Maintenance Levy Fund and the project funded by the World Bank.

The Senate said governors have demonstrated open contempt for the House and its constitutional mandate to oversight national revenue allocated to the county governments.