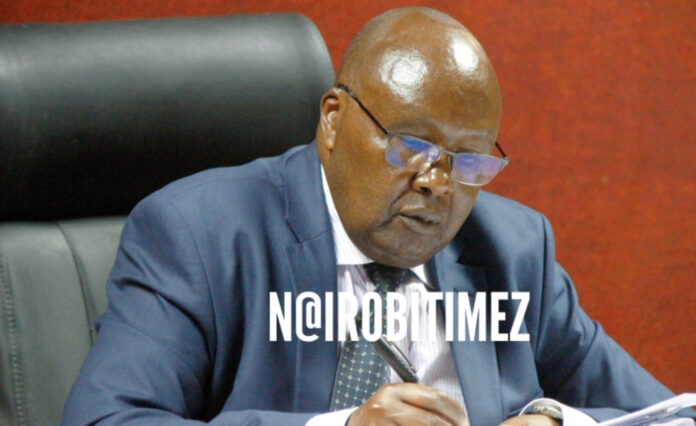 Lawyers have won a reprieve after the High Court suspended the implementation of a section of the law that compels them to report clients transactions that are above Sh1 million.

Justice James Makau temporarily suspended section 2 (c)(i) and section 14 (b) of the Proceeds of Crime and Anti-Money Laundering (Amendment) Act, 2021, which was assented by President Kenyatta on January 3.

“A conservatory order be and hereby issued in the interim stopping any further, precipitate, implementation or operationalization of section 2(c)(i) and section 14(b) of proceeds of crime and Anti-money Laundering (Amendment Act. 2021 pending hearing and determination of the application “, ordered Justice Makau.

Lawyer Mwaura Kabata moved to court seeking to stop the operationalization of sections 2(c)(i) and 14(b) of the Proceeds of Crime and Anti- Money Laundering (Amendment) Act, 2022.

Mwaura challenged the implementation of the law, which requires lawyers to keep cash records of transactions of their clients, which are beyond Sh1 million.

The Financial Reporting Centre and the Attorney General had been named as respondents in the suit as the Judge allowed LSK Nairobi Branch and the National Assembly to join the case.

In the case, Kabata argues that the law has made them unwilling state agents and turned law offices into archives for use by the police and prosecution.

He contends that by operation of the provisions introduced into the Act, lawyers are impeded in their duties and their service delivery to their clients, as the provisions manifestly erode advocate-client privilege.

Advocates are, by operation of the afore-mentioned provisions, obliged to report to the Financial Reporting Centre in terms of the Act.

Through lawyer Peter Wanyama and Omwanza, Mwaura further argues that there are harsh penal sanctions for non-compliance as they authorise sweeping searches of law offices which inherently risks breaching advocate-client privilege.

The court heard that advocate-client privilege has already been recognized as a constitutional norm and breach of this principle of fundamental justice is sufficient to establish the potential deprivation of liberty that violates article 24 and 31 of the Constitution.

“Whereas the judges and advocates are not above the law, the legal system protects the bar and the judiciary,” argued lawyer Peter Wanyama.

“It is like amending the constitution through the back door. I fully support the issuance of conservatory orders,” he said.

FRC and the Attorney General had opposed the grant of interim orders saying they were yet to interrogate the case and file their responses.

They claimed the prayers sought, intended to stop the implementation of the money laundering act and therefore should not be granted.

“We are not seeing any matter that warrants the suspension of this clause. We would want to put in a detailed response and therefore we request for time to put in papers,” argued Dennis Moroga for the Attorney General.

According to lawyer Omwanza Ombati, hose sections – vide the amendment- make advocates “reporting agents” (essentially spies against their own clients) to FRC and other law enforcement agencies on any transactions of more that 1 million shillings, with respect to land, money held in clients accounts, bonds etc and further compels advocates to report on what they perceive as “suspicious transactions.”

He claimed that the advocates have been converted into state agents to spy against their own clients by the Amendment.

“Law offices have become -adjunct- police stations, required to store the information for 7 years. This not only is it in breach of advocate-client confidentiality but also threatens the independence of the Bar”, Omwanza adds.

He added that the Amendment further authorises FRC and law enforcement agencies by section 130B of the amendment to conduct warrantless searches on advocates offices and intercept privileged information between advocates and their clients, without any resort to courts.

The Judge directed them to file their responses within 14 days and the matter to be mentioned on January 22 to confirm compliance and other directions.